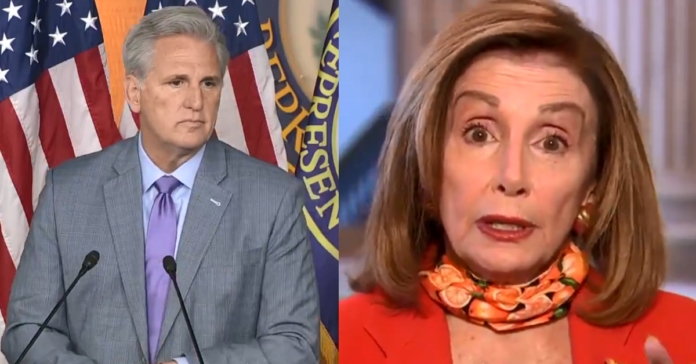 During an interview on Thursday with Mark Levin, House Minority Leader Kevin McCarthy announced that he and some House members were launching a plan to determine if Speaker of the House Nancy Pelosi is mentally fit for office.

“To even bring this up when you’re talking 27 days before an election,” McCarthy said. “You know she’s second in line right after the vice president.”

“It really brings into question her own mental capacity to be Speaker of the House,” McCarthy said.

“Are you going to recommend the same commission take a look at her mental capacity?” Levin asked. “Does she have to submit any kind of records about her health? Mental health?”

“Shouldn’t she have to submit to the same test that she’s trying to claim?” McCarthy said.

“I am getting together with a number of members — and can tell you there are people on the other side that have raised this question as well,” McCarthy added. “We’re going to get together; find out ways that we can craft something.”

“She knows this will not be a reality,” McCarthy said. “This is just another attempt to attack our democracy.”

“The public needs to know the health condition of the president,” Pelosi said yesterday before adding the information is needed to “make a judgment about the actions that were taken after that.”

“He’s bragged about the medication he’s taken, there are articles by medical professionals saying this could have an impact on judgment,” she added.

Under the 25th Amendment, Congress, the cabinet and vice president can strip powers from a president if for some reason he or she is declared unfit under dire circumstances. But that requires a 2/3 vote of both houses.

Section 4 of the 25th Amendment also states that Congress “may by law” indicate that it is believed “the President is unable to discharge the powers and duties of his office.”

The “by law” part is what Pelosi and Rep. Jamie Raskin, D-Md., are proposing Friday.

They have a bill, which would have to be passed by both chambers of Congress and signed by the president, which would set up “the Commission on Presidential Capacity to Discharge the Powers and Duties of the Office.” Prospectively, that commission would adjudicate the president’s viability for office.

Raskin introduced a similar bill in 2017.

While such a bill may pass the Democrat-controlled House, it would seem extremely unlikely to pass the Republican-controlled Senate unless there was a significant development in Trump’s health. However, it introduces a new political narrative just weeks before Election Day.

.@SpeakerPelosi on Democratic legislation on forming a commission on presidential capacity:

"It's not about the election at all…The timing is for now because people want to know…that there is a way to do this." pic.twitter.com/LQm3wG8RsZ