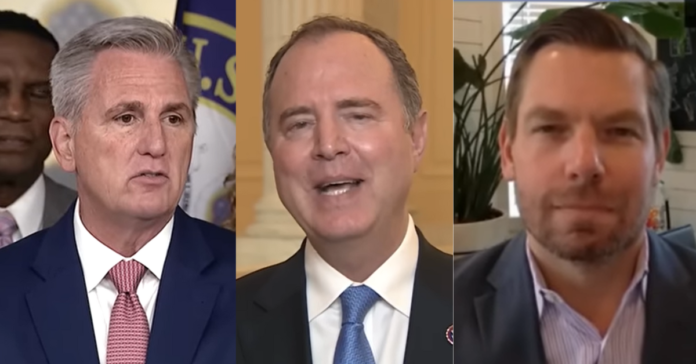 Kevin McCarthy went on Fox News’ hit show, Jesse Watters Primetime, and issued a warning to Dems Reps Adam Schiff and Eric Swalwell. Kevin told them when he is Speaker, after the red wave in 2022, he will send them packing from their prized positions on the Intel Committee.

McCarthy told Jesse that a crew from the Late Show with Stephen Colbert that had been arrested for unlawful entry at the Capitol complex had been let in by a former Schiff aide.

“You know who let them back in?” McCarthy said. “A former Schiff staffer.” Watters said: “Of course. He’s got his fingerprints on everything. And they’re filthy.”

Kevin then promised to boot the Schiff and Swalwell from the Intel Committee.

“But I’ll promise you this. When I’m Speaker, he will not be on the intel committee anymore. And you know what else? Swalwell won’t either.

“I don’t know if this is a high bar, but you have a relation with a Chinese spy, you shouldn’t be allowed to be on the intel committee.”

A suspected Chinese intelligence operative developed extensive ties with local and national politicians, including a U.S. congressman, in what U.S. officials believe was a political intelligence operation run by China’s main civilian spy agency between 2011 and 2015, Axios found in a yearlong investigation.

While this suspected operative’s activities appear to have ended during the Obama administration, concerns about Beijing’s influence operations have spanned President Trump’s time in office and will continue to be a core focus for U.S. counterintelligence during the Biden administration.

…Among the most significant targets of Fang’s efforts was Rep. Eric Swalwell (D-Calif.).

Fang took part in fundraising activity for Swalwell’s 2014 re-election campaign, according to a Bay Area political operative and a current U.S. intelligence official.

Swalwell’s office was directly aware of these activities on its behalf, the political operative said.

Federal Election Commission records don’t indicate Fang herself made donations, which are prohibited from foreign nationals.

Fang helped place at least one intern in Swalwell’s office, according to those same two people, and interacted with Swalwell at multiple events over the course of several years.

A statement from Swalwell’s office provided to Axios said: “Rep. Swalwell, long ago, provided information about this person — whom he met more than eight years ago, and whom he hasn’t seen in nearly six years — to the FBI.

To protect information that might be classified, he will not participate in your story.”

48 people just died on the back of an abandoned tractor-trailer in the sweltering Texas heat. President Biden's open border policies are responsible for that. pic.twitter.com/MZGP2JGG7p

President Biden has a Constitutional duty to keep Americans safe—he must direct the Justice Department to deter and prevent violence against Supreme Court Justices, churches, and pro-life pregnancy centers. Now. Before it's too late.