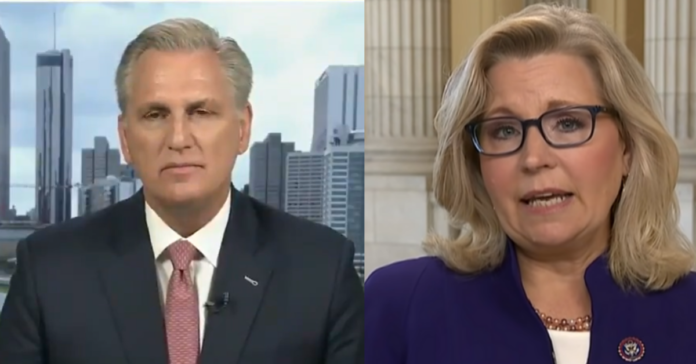 House Minority Leader Kevin McCarthy (R-Calif.) got caught trashing Liz Cheney on a hot mic after an appearance on Fox News. He said he had “had it with her” and said he’s “lost confidence” in Rep. Liz Cheney (R-Wyo.) all but sealing her fate in GOP leadership.

“I think she’s got real problems,” McCarthy told Steve Doocy off-air ahead but caught on a hot mic. “I’ve had it with, I’ve had it with her. You know, I’ve lost confidence. Well, someone just has to bring a motion, but I assume that will probably take place.”

“This is about whether the Republican Party is going to perpetuate lies about the 2020 election and attempt to whitewash what happened on Jan. 6,” Cheney spokesperson Jeremy Adler said. “Liz will not do that. That is the issue.”

Earlier McCarthy confirmed the rumors that the GOP members are not happy with Cheney although he did not say she would be removed.

He went on “Fox & Friends” to confirm there is indeed a push to oust Rep. Liz Cheney from GOP leadership, but said it was not over her vote to impeach Trump but rather her inability to stay on message.

Kevin said: “No, there’s no concern about how she voted on impeachment. That decision has been made. I have heard from members concerned about her ability to carry out the job as conference chair, to carry out the message.

“We all need to be working as one if we’re able to win the majority.

“I haven’t heard members concerned about her vote on impeachment. It’s more concerned about the job ability to do and what’s our best step forward that we can all work together instead of attacking one another.”

Cheney was able to keep her job in leadership when she won what was not a close vote but times have changed and so have the number of GOP members who want her removed.

According to one report, they have already started discussing who will replace her with Elise Stefanik being just one GOP Rep under consideration.

Rep. Jim Banks (R-Ind.) heads a powerful conservative caucus in the House. He said her constant criticisms of Trump are “an unwelcome distraction.”

Selling such a team in a midterm year would compound the GOP’s challenges with suburban women.

The conference meets next Wednesday, May 12. Most members expect the process to oust Cheney to begin then, whether formally or informally, after some of McCarthy’s top lieutenants broadened their complaints against her.

“I have heard from members concerned about her ability to carry out the job as conference chair, to carry out the message. We all need to be working as one if we’re able to win the majority." pic.twitter.com/Neg8gJZBZc

Biggest signal yet Cheney could be gone soon from leadership. Kevin McCarthy this AM: “I have heard from members, concerned about her ability to carry out the job as conference chair, to carry out the message. We all need to be working as one, if we're able to win the majority.”