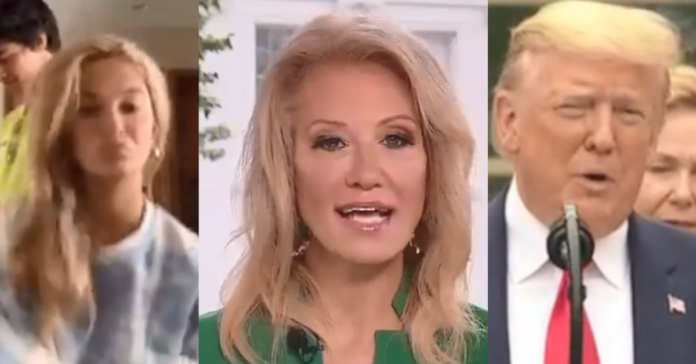 Kellyanne Conway’s daughter went after President Trump today in a scandalous fashion. First, she mocked him for his grammar, dripping with condescension a teenager ought not have before she pulled a McMaster and hurled a vulgar insult at President Trump.

“Can someone explain to me why people like @realDonaldTrump feel the need to capitalize random words in a sentence…?? like this isn’t the preamble to the constitution. These are tweets, babe. learn how to use grammar correctly.” Then she said about Trump: “You’re a f*cking idiot.”

Claudia also tweeted out Nancy Pelosi saying, “We must ensure that all Americans who want to vote-by-mail this fall are able to. No one should be forced to choose between their health and their vote.”

And Ilhan Omar saying, “Keep fighting for justice for Breonna Taylor. All the officers involved need to be arrested and held accountable. Abolish ICE.

And this is not the first time she went after Trump. From Vulture:

On Friday, July 31, Trump announced that he would ban TikTok in the United States, inciting fear among cool teens and lip-sync comedians alike.

There’s one Gen-Z hero who has been through personal TikTok bans of her own, though, and has come out the other side with a stronger brand than ever: Claudia Conway, Kellyanne Conway’s “radical agnostic liberal/leftist” 15-year-old daughter.

Earlier in July, Conway’s famous conservative parents made her delete her TikTok, which included numerous videos supporting the Black Lives Matter and police protest movements, as well as a few videos proving that yes, she is actually Kellyanne Conway’s daughter.

On July 18, five days after she posted her “last video cuz my parents are making me delete all social media,” Claudia was back, posting a duet promoting TikTok user ghostiethehomie for selling masks that say “CLAUDIA CONWAY IS A BAD BITCH” with the proceeds going to BLM.

On July 22, “KDAWG” herself did an in-person Zoombomb, making a rare appearance on Claudia’s TikTok. All signs pointed to inter-Conway relations healing.

But after a fight over dyeing her hair (Kellyanne apparently thought pink was too “showy”), Claudia was back to using the fox emoji and the news emoji to express her frustration with Kellyanne.

when we abolishing ICE? 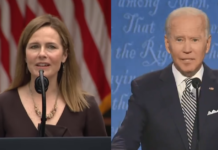