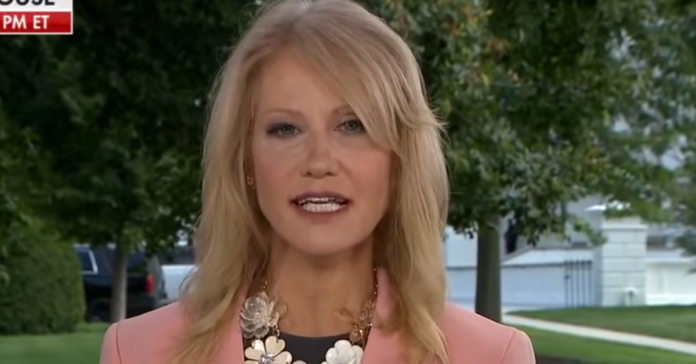 Kellyanne Conway went on Bill Maher two weeks ago and stood up for all the good things the Trump administration did while condemning the riots.

Kellyanne left the administration after her teenage daughter took to social media and acted out in a way that made Kellyanne put her family first. She resigned from one of the most powerful jobs in the world. Her husband George also stepped down from his role with The Lincoln Project.

Now, her daughter is apologizing after publicly accusing Kellyanne of leaking topless photos of her that had authorities investigating.

Claudia Conway apologized Tuesday for publicly accusing her mother Kellyanne of leaking a topless photo of her to Twitter, insisting she’d ‘never intentionally do that’ and says she believes the former Trump aide was hacked.

The 16-year-old posted a series of videos to TikTok this morning, hours after Kellyanne was accused Monday of sharing the partially nude image of Claudia using Twitter’s newly launched Fleets feature, which deletes posts after 24 hours.

The Fleet has since been removed but images of the post have been shared widely online.

Having initially warned her mother yesterday that she was ‘going to f***ing jail’, Claudia reversed course Tuesday and apologized, saying she had acted ‘irrationally and impulsively’.

In a separate video posted Tuesday, Claudia continues: ‘Yesterday when I was made aware of the situation, I was distraught and reacted very irrationally and impulsively and it’s something that I do regret.

‘I know that my mom would never, ever post anything to hurt me like that intentionally and I do believe she was hacked.’

Twitter told Variety it is investigating the apparent leak. The social media giant said its unsure how long the post was visible, how many people saw it, and who deleted it.

Police in Alpine, New Jersey, where the Conway family lives, also told DailyMail.com: ‘An investigation is being conducted. No additional information can be released.’

Our daughter Claudia asked me to tweet this statement for her. https://t.co/ilH7IFqERB

Claudia Conway has accused her mother Kellyanne Conway of sharing a topless photo of the 16-year-old on Twitter. https://t.co/3fOCmMQgKy