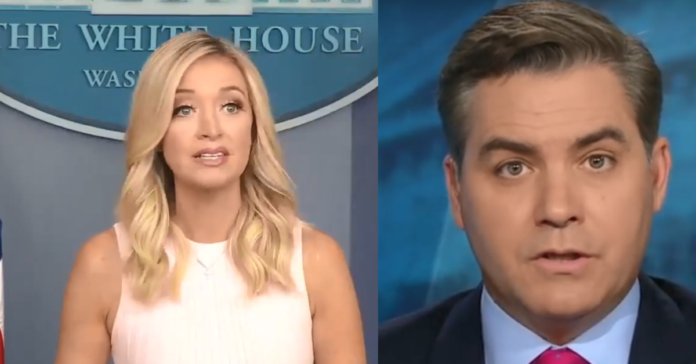 “Does the president or the administration plan to make it very clear to the Russian Federation that there should not be bounties placed on the heads of American soldiers serving in Afghanistan?” Acosta asked Kayleigh McEnany.

“We make that clear each and every day to every country around the world that this president will always stand by our law enforcement,” McEnany said. “No one has been tougher on Russia. What you’re…”

“Not just any country,” Acosta said. “The Russians. Will you tell the Kremlin and President Putin.”

“Each and every country,” McEnany replied. “But what you’re getting at …”

Acosta continued: “ Putin… not to put bounties on the heads of American soldiers?”

“Of course. We tell each and every country that. But what you’re getting at is uncorroborated intelligence, and you’re treating it as if it were true.”

“To this day, there are varying views on the Russian bounty intelligence — Department of Defense, National Security Council and the Office of Director of National Intelligence all pointing that out,” McEnany responded.

“You know, I’m not going to answer a question based on unverified intelligence, but rest assured, every country in this world is put on notice that bounties on the heads of U.S. troops is unacceptable, and this president will stand for U.S. troops at home and abroad.”