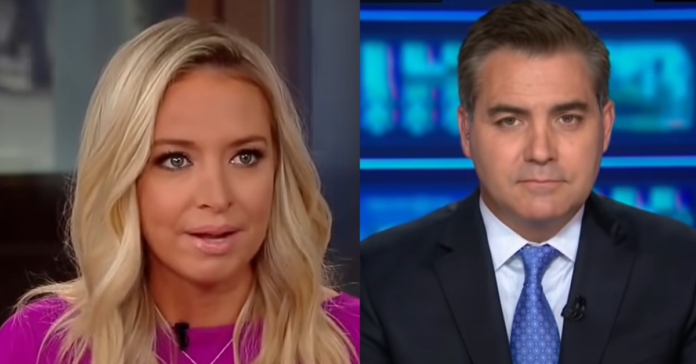 “I waited four years for there to be any type of coverage of Melania, of you, of Morgan Ortagus, of Sarah Huckabee Sanders, of any of those strong women in leadership roles in that administration that were were working tirelessly day in and day out and somehow looking absolutely stunning the entire time. But not only was there a dearth of, even, profiles, not to mention Annie Leibovitz shoots, but there was also, frankly, a concerted attack, and quite frankly, vicious coverage of you all personally and professionally,” Fox News host Emily Compagno said.

“That’s right. Instead of the glowing profiles, there were hit pieces, repeatedly, time and time again,” McEnany said. (see videos below)

She continued: “It’s just so sad that you have a fawning press corps like this, a fawning media, sycophantically covering members of the Biden administration. They asked Jen Psaki yesterday about Joe Biden’s cat. I mean, it’s kind of incredible the questions that they ask.

“The Washingtonian wrote a piece saying, the problem, ‘The awkward feeling of rooting for the White House Press Secretary.’ We need investigative journalism. We don’t need fawning coverage. It doesn’t do the American people any justice.

“I remember when The New York Times came to the Trump campaign headquarters and took pictures of all the women of the Trump campaign because we had so many. I was pregnant at the time; I believe Lara Trump was pregnant. We kept waiting for the story to pop. It never did because it just simply wasn’t negative enough.

“Maggie Haberman wrote as the Biden administration was coming in that, you know, it was refreshing to see women like Jen Dillon, the head of the Biden campaign talking about being a mother.

“Oh wait,’ I said; I quote-tweeted Maggie Haberman with a picture of me with a stroller in the White House because Sarah was a working mom, Stephanie Grisham was, I was and Morgan Ortagus was pregnant during her final year at the State Department. But Maggie Haberman seemed to have forgotten that.

“Let me make one point: I don’t want, I don’t care about a Vogue magazine profile; I never did. When I went into the administration I had one goal:

“It was to elevate children who are killed in our streets from the White House press podium; it was to talk about people like David Dorn, who lost his life and his murder was streamed live for America to see.

Somehow Brian Stelter managed to take his humiliatingly "tell-me-why-I'm-bad-Jen" start to his interview and get even more sycophantic from there.

Even Psaki had to be thinking: "oh my god, the intensity of his adoration is…. uncomfortable."https://t.co/mhXFwAZ3Oy

CNN’s Brian Stelter’s sycophantic question to Jen Psaki reveals how well this guy would fit in as a jester or juggler in a medieval French court. pic.twitter.com/hYHy4GrkyI