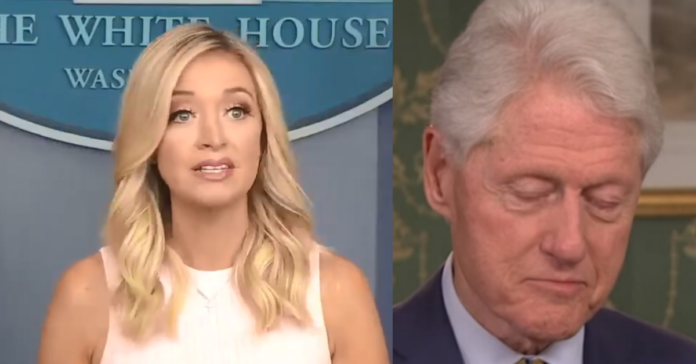 She said what Trump did was a “very important moment for justice,” before calling Stone’s felonies “process crimes” used to “justify the waste in tax dollars” for the whole Russia investigation.

Next, McEnany smartly turned the tables and brought up Bill Clinton’s scandalous and very political if not purely financial pardons he issued on his way out the door of the White House.

Remember, Marc Rich was a disgrace and Clinton let him off the hook after a huge donation from his wife. If Stone is a scandal so is that.

McEnany said it was “curious” that ex-FBI official Andrew McCabe, director of the CIA under President Obama John Brennan, and Obama’s Director of National Intelligence James Clapper had all been accused of making false statements but did not face prosecution like Stone.

“Last time I checked they didn’t have 29 FBI agents wearing tactical gear showing up at their house in a pre-dawn raid,” the press secretary said.

“Instead McCabe and Brennan and these guys are given lucrative contracts, books, contributorships.”

McEnany said that Trump is “the president of criminal justice reform,” and the Stone commutation was part of his fight for those given unduly harsh sentences. She noted that while Trump has issued 36 pardons and commutations, Obama had issued 1,927.

Clinton pardoned his half-brother for drug charges after he’d serve the full sentence more than a decade earlier.

McEnany also pointed to Clinton’s pardon of Susan McDougal, one of his associates, for her role in the Whitewater scandal after she refused to testify about Clinton’s role, and Marc Rich, who donated $450,000 to the Clinton Library Foundation.

Rich had fled the U.S. during prosecution when he was charged with 51 counts of tax fraud and owed $48 million in taxes.