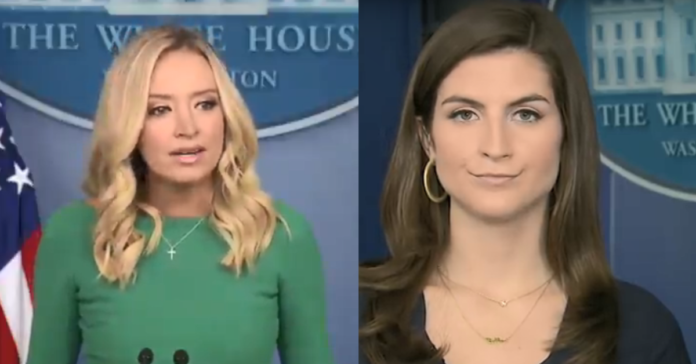 White House press secretary Kayleigh McEnany had some contentious exchanges today with the media gathered to hear updates about the vaccines.

Operation Warp Speed was a worldwide effort led by the Trump admin to identify, manufacture, and distribute vaccines and they should be commended for it. It was truly a historic achievement.

Pfizer announced more amazing results today and filed for emergency use which means that that vaccine will be available soon.

Towards the end of the briefing, a reporter yelled out, “When will you admit you lost the election?”

Kayleigh McEnany ignored the reporter and moved on until she had a sharp back and forth with CNN’s Kaitlan Collins over a similar question.

Kayleigh McEnany paused before delivering the knockout blow: “I don’t call on activists.”

Collins responded that she was not an activist but Kayleigh was already halfway out the door.

Kayleigh McEnany smacks CNN's Kaitlan Collins away on her way out of today's briefing:

"I don't call on activists." pic.twitter.com/yjUOypDR1e