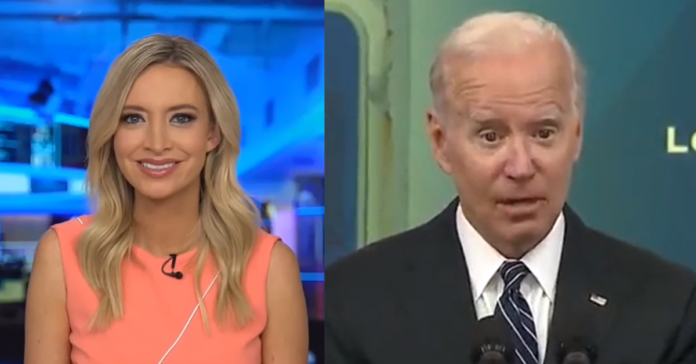 Former White House press secretary Kayleigh McEnany went on Fox News hit show “Jesse Watters Primetime” to talk about President Joe Biden’s job performance. Kayleigh, in the videos below, says Biden is like a ‘toddler breaking everything’ that he lit the country on fire.

To say Biden is getting an F across the board is an understatement. Because he actually deserves a lower grade. Before every test he faced he was given both the questions and the answers. Usually months in advance. And he still failed. They were warned about the consequences of their actions and inactions and how to fix them before they created chaos.

And they still failed. And not just once but every time. That ain’t easy to do. Biden’s pattern in the Senate was to take forever to make decisions (to make sure the lobbyist checks cleared) and he has carried that into the White House.

Biden and his team were telling the world for a month Russia was going to invade Ukraine. No one believed them but the intel was solid. Biden should have, when he knew what was coming, picked up the phone and made nice with Saudi ruler MBS so we wouldn’t have had skyrocketing oil prices which directly led to the skyrocketing inflation we are suffering from.

But Biden did not. Even now, as he goes over there to beg for oil, he won’t fully commit telling the media that he is not going to meet MBS but only to attend a conference where MBS will be.

No one believes him. He looks weak even saying it because it shows he is afraid of AOC and MSNBC. And that lukewarm support may get Joe an extra 100,000 barrels a day from the Saudis which is not enough to save him.

He would be better served telling the media and AOC, as Trump did, that they are a bunch of naive babies and if we didn’t kick Saudi Arabia to the curb after 911 we won’t do it over one brutal murder.

The public would respect that as it is the truth and it may get Biden what he needs from the Saudis. Instead, Biden, like a toddler flailing about, makes it worse.

Kayleigh summed up the disaster that is Joe Biden:

“I keep going back to the beginning of this administration. You have President Joe Biden coming in. He meets with a historian.

“He talks about how he wants to be the next FDR, and then he lights the country on fire.

“He’s like a toddler in a glass shop that can’t stop flailing his arms and breaking everything.

“How can I get a quick fix, forgive student loan debt.

“I will give them this.

“So, they’re taking their own advice,” she said.

.@kayleighmcenany says Biden is lighting the country 'on fire' https://t.co/BFzMwKOxxp