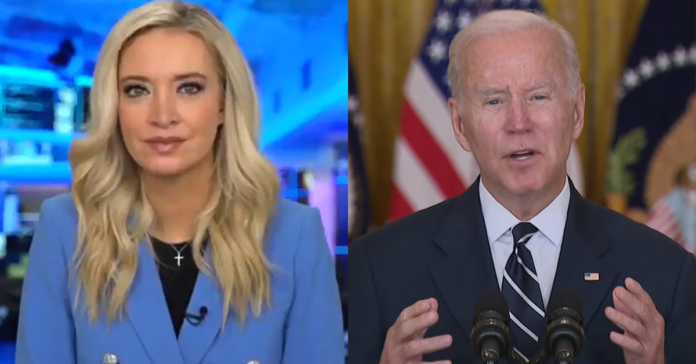 Kayleigh McEnany called out the total incompetence of the Dem Party saying yesterday, when the Dems snubbed Joe and would not vote for his must-pass infrastructure bill, was the second-worst day of his presidency.

She said: “Yesterday was the second-worst day of Biden’s presidency. These are Democrats. He should’ve been able to go into that meeting, push for a vote on infrastructure, but he didn’t. This is twice he’s gone in and blown up the deal.

“The White House naively promised us a rotten deliverable. They couldn’t even deliver us a rotting pile of manure (the multi-trillion dollar, inflation-causing government takeover) Just wow!

“Biden’s staff, to set him up with this framework without legislative text that he releases with no consensus or support, they really served him poorly in addition to the president serving himself poorly.”

“Not good optics. It’s terrible optics,” said Rep. Alan Lowenthal (D-Calif.). “People are frustrated right now,” added Rep. Jim Costa (D-Calif.), said. “There’s a lack of trust, and you got a lot of members here that have been here four years or less and they don’t seem to understand how you get things done.”

Rep. Stephanie Murphy (D-Fla.), said it is “extremely frustrated that legislative obstruction of the infrastructure bill continues — not based on the bill’s merits, but because of a misguided strategy to use the bill as leverage on separate legislation.”

“This is the whole thing: We need to see what we’re doing because we didn’t want delays, and we wanted to make sure that we could go from a framework to legislation. And because of our clear position on that, we got legislation,” said Rep. Pramila Jayapal (D-Wash.), head of the Congressional Progressive Caucus (CPC).

“Even in the beginning of the summer, this was about the White House and the Senate, and the House was excluded,” said Rep. Alexandria Ocasio-Cortez (D-N.Y.). “This is, I think, the result of that omission.”

The move came after progressives refused to relent in their opposition to the $550 billion infrastructure bill amid a standoff over Democrats’ separate, party-line $1.75 trillion social spending measure.

It followed a visit to Capitol Hill by President Joe Biden, who personally asked House Democrats for their support on both the infrastructure plan and the separate social policy framework.

But Speaker Nancy Pelosi and her leadership team were ultimately unable to win over dozens of dug-in liberals in time for a Thursday evening vote.

House liberals said they want to review the legislative text of $1.75 trillion social spending legislation the White House outlined Thursday and get a commitment of support from centrist Sens. Joe Manchin (D-W.Va.) and Kyrsten Sinema (D-Ariz.) — something the two have not outright given.

Despite an aggressive whipping campaign from Democratic leaders, as many as 30 liberal Democrats threatened to block the roughly $550 billion Senate-passed infrastructure bill, according to multiple people familiar with the vote-tallying operation.

.@kayleighmcenany: "Yesterday was the second-worst day of Biden's presidency.

These are Democrats. He should've been able to go into that meeting, push for a vote on infrastructure, but he didn't.

This is twice he's gone in and blown up the deal."@MariaBartiromo @FoxBusiness pic.twitter.com/NtczvuwYAj

.@kayleighmcenany: "[Biden's] staff, to set him up with this framework without legislative text that he releases with no consensus or support, they really served him poorly in addition to the president serving himself poorly."@MariaBartiromo @FoxBusiness #morningswithmaria pic.twitter.com/KKk64x0e0a