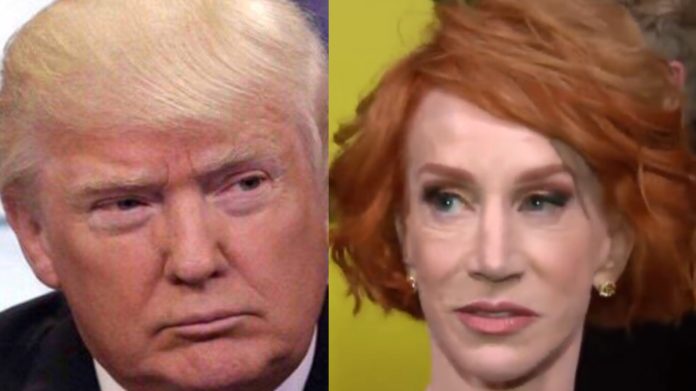 Kathy Griffin lost a lot with her horrific publicity stunt about beheading President Trump. She lost lucrative jobs and other gigs that boosted her public image that she would monetize later.

She lost sponsorships and commercials and could not do her standup in America and was literally forced to go overseas to work.

And now we know that was just the tip of the iceberg. She is finally revealing what her stunt cost her and all I can say is wow.

She was flagged by Interpol and was put in the no-fly list and was stopped at every airport she went near.

She also was very close to facing “conspiracy to assassinate the president of the United States” charges.

From The Huffington Post: On Friday’s broadcast of “The Late Show with Stephen Colbert,” the comedian opened up about the backlash she received (including a tweet from Trump himself) that she said “changed my life irrevocably.”

She also revealed hitherto unknown details about the two-month federal investigation into the image, which saw her placed on a temporary no-fly list and facing a charge of “conspiracy to assassinate the president of the United States.”

Griffin, who was fired as co-host of CNN’s New Year’s Eve programming following the stunt, said she was also added to an Interpol list, which meant she was “detained at every single airport” she visited during her subsequent 18-country tour.

“So a lot of people thought, you know, I got a call from the Secret Service or got in fake Hollywood trouble. But, no, this is real-life trouble,” Griffin told Colbert. “That’s where your tax dollars went, everybody, investigating Kathy Griffin.”

The longtime standup and reality show staple told The Late Show’s Stephen Colbert on Friday about how both the Secret Service and the Assistant U.S. Attorney’s Office conducted a two month federal investigation of the former red carpet gadfly for “conspiracy to assassinate the president of the United States.”

In addition, Griffin told Colbert in their extended interview, she was put on the no-fly list for those two months, received death threats from Trump supporters, lost her CNN New Year’s Eve gig (and the support of co-host Anderson Cooper, who, Griffin says, called her “disgusting”), and was put on notice with Interpol, so that she was detained at every airport she visited during her subsequent worldwide tour. (The “Laugh Your Head Off” tour.)

“The walls caved in on me,” said Griffin, telling Colbert that, in the U.S. at least, her career hasn’t recovered, while she’s lost “75 percent” of her friends “that never came back.”