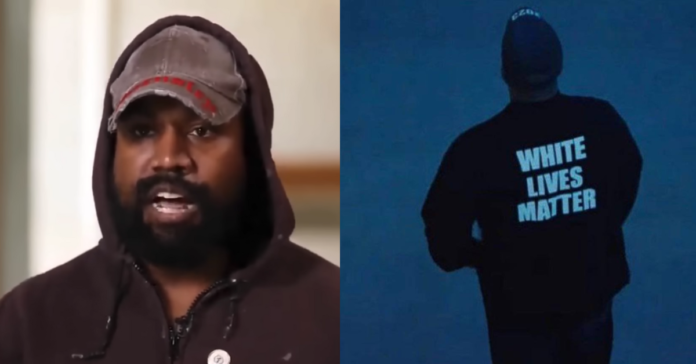 The artist formerly known as Kanye West stole the show by wearing a t-shirt emblazoned with the phrase “White Lives Matter” on the back while addressing attendees at his YZY SZN 9 presentation in Paris on Monday.

The critics and goons on the left are not happy with West, but they haven’t been since he flipped the script and backed former President Donald Trump and came out as pro-life.

According to Complex: “During his opening remarks on Monday, Ye touched on a variety of topics, including how certain outlets focused on the delayed start time of his prior events when such delays were (in Ye’s words) merely a side effect of trying to “present the best idea.”

Kayne said this about abortion earleir

“I almost killed my daughter.

“In the Bible it says, ‘Thou shall not kill.’ I remember my girlfriend called me screaming and crying, she said, ‘I’m pregnant.’

“She said she was a pregnant and for one month, and two months, and three months we talked about her not having this child.

“She had the pills in her hand.

“I was in the Paris apartment where my wife was actually robbed when the screen went black and white and God said, ‘If you f— with my vision, I’m gonna f— with yours.

“Even if my wife were to divorce me after this speech, she brought North into the world,” he said.