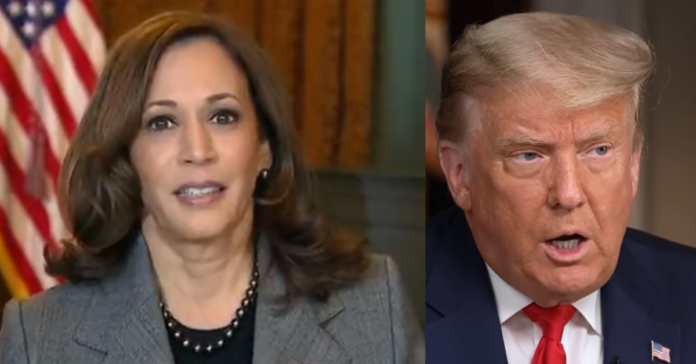 Kamala Harris, the VP with some of the lowest approval numbers in history, just tried to blame Trump and his administration for the chaos at the border but flubbed it with a poor choice of words and ended up indicting Joe Biden instead.

“It’s not going to be overnight and we can’t just flip a switch and make it better. The reality is that we inherited an immigration system that was deeply broken,” Harris said on ABC today.

Has anyone told Kamala that Biden ‘flipped the switch’ on Trump’s remain in Mexico policy? Turning Trump’s policy off and turning Joe Biden’s on resulted in the flood of migrants at our border. In fact, the courts have ordered Kamala and Joe to flip the switch and turn Trump’s policies back on but they have delayed implementation and are still trying to find a loophole to ignore the order altogether.

What Trump had in place worked. Turn it back on and the problem is solved. Even Obama says we have to have borders.

“It’s requiring us to actually put it back together in terms of creating a fair process that is effective and efficient, but on the root causes piece, what we are looking at is that frankly, people don’t want to leave home,” Harris said naively of her non-plan to fix the crisis.

Inflation came up and Kamala said: “It’s real. And it’s, it’s rough. Groceries, the cost of groceries, has gone up, the cost of gas has gone up. And, as this is all happening, in the context of two years of a pandemic. Over 700,000 lives lost much less the loss of livelihoods and, and a sense of normalcy. So, it’s a lot. And it’s one of the highest priorities actually, for the president and for me.

“Essentially what we need to do is, we need to bring down the cost of living and so we’re dealing with this issue in a number of ways.

“But also we need to deal with the cost of child care, the cost of prescription drugs, the cost of housing, and that’s what we intend to do when we get the Build Back Better agenda passed.”

“I know you hope to get that passed, but as you know, several people including Senator Manchin, who could be the key vote on Build Back Better, believe that the bill is actually going to make inflation worse,” Stephanopoulos said. “That’s why they’re holding back.”

“So, here’s the thing, talk tot 17 Nobel laureates who are economists, who actually have studied the issue and have indicated that we’re not looking at a contribution to inflation, but actually we’re going to bring prices down.

“In fact, today Moody’s and a number of others have said, listen, when you look at the numbers, the whole point about inflation and why it hurts us is because prices go up. With the Build Back Better agenda, it’s gonna bring the cost down, again, cost of child care, elder care, housing.

“These are very critical issues for American families, who have to make very difficult choices about whether they can afford to pay for child care, or prescription drugs, or, or pay the rent.

“So, that’s what we’re going to actually accomplish, accomplish with this, is to bring the prices down,” she said.

Harris blames Trump for illegal migrant crossings at a 20-year high, with numbers approaching 2M crossings since the beginning of the year.

If looking for why Biden-Harris is polling in the 20s on the issue, perhaps it's because of zero inclination to fix it while passing blame https://t.co/jZv4DoQRQC

EXCLUSIVE: Asked about the steep rise in inflation by @GStephanopoulos, VP Kamala Harris says bringing down the cost of living is “one of the highest priorities actually, for the president and for me.” https://t.co/38sK1CWxSX pic.twitter.com/W6nY6crkIR