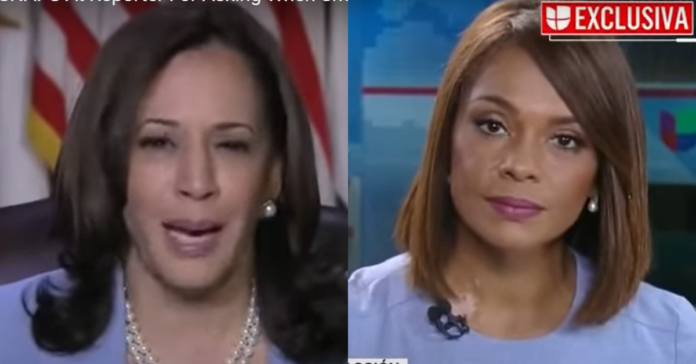 Vice President Kamala Harris botched another interview over the border and if the Dems are not nervous yet, it would be a good time to start sweating. Harris is the presumptive nominee if Biden doesn’t run again and she looks shaky to say the least.

Harris snapped at Univision reporter Ilia Calderón after the reporter pressed Harris about visiting the border. Calderón went after Harris, who remember was assigned by Biden to handle the border crisis, over why the VP has yet to make it down to the US-Mexico border to see the problem in person and talk to the people on the ground dealing with it.

Harris continued: “So my first trip as vice president of the United States was to go- in terms of a foreign trip- to Guatemala, to be on the ground there to address and to be informed of the root causes why are the people of Guatemala leaving.”

“Do you have a date for your trip to the border?” Calderón said.

“I will keep you posted,” Harris said.

“You haven’t been to the border,” Holt told her.

“And I haven’t been to Europe,” Harris uncomfortably chuckled. “I don’t understand the point that you’re making.”

Gov. Greg Abbott is not waiting on Kamala announced that he will build a border wall along the state’s boundary with Mexico rather than wait for the feds to do their job.

“It will help all of us to work on ways to stem the flow of unlawful immigration and to stem the flow of illegal contraband,” Abbott added. Abbott announced the news today while discussing a bunch of new border initiatives. Those included a $1 billion allocation for border security in the state budget and establishing a Governor’s Task Force on Border and Homeland Security.

Details such as costs and location were not immediately said by the governor as there are plans for an announcement.

The governor and other law enforcement agencies took part in a summit on Thursday about security along the southern border.

During the summit, Abbott also announced initiatives to address border concerns such as creating the Governor’s Task Force on Border and Homeland Security, as well as a $1 billion allocation towards border security.

Abbott blamed the Biden administration’s policies for the surge in migrants coming into Texas.

In fairness, I did not have @VP Kamala Harris hitting @iliacalderon with "I'm speaking" on my bingo card. pic.twitter.com/trCWiRxkft