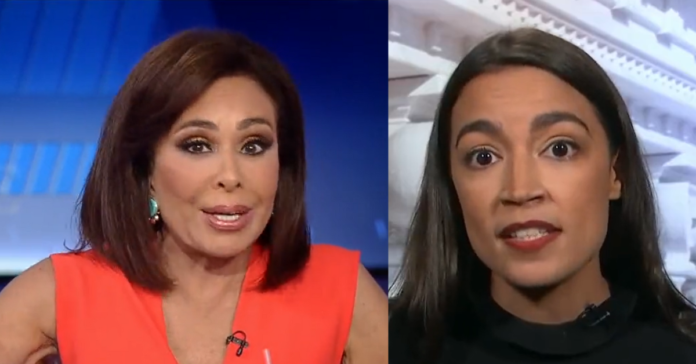 “The Five” co-host Jeanine Pirro schooled Rep. Alexandria Ocasio-Cortez about the U.S. Constitution Wednesday on “The Five” after AOC called for the impeachment of Supreme Court Justices Clarence Thomas, Brett Kavanaugh, and Amy Coney Barrett on NBC’s Meet the Press.

Chuck Todd said, “Do you think the House Judiciary Committee should begin the process of an investigation there.”

AOC said: “If we allow supreme court nominees to lie under or under oath and secure lifetime appointments to the highest court of the land and then issue, without basis, if you read these opinions, issue without basis, rulings that deeply undermine the human and civil rights of the the majority of Americans we must see that through.

“There must be consequences for such a deeply stabilizing action and hostile takeover of our democratic institutions.

“To allow that to stand is to allow it to happen.

“And what makes it particularly dangerous is that it sends a blaring signal to all future nominees that they can now lie to duly elected members of the United States Senate in order to secure Supreme Court confirmations.

Chuck Todd: “Do you think lying at a confirmation hearing is an impeachable offense?”

“I believe lying under oath is an impeachable offense.

“I believe that violating federal law and not disclosing income from political organizations as Clarence Thomas did years ago is also potentially an impeachable offense.

“I believe that that not recusing from cases that one clearly has family members involved in with very deep violations of conflict of interest are also impeachable offenses.

“And I believe that this is something that should be very seriously considered including by members by senators like Joe Manchin and Susan Collins.”

“These people have no idea what’s going on. And that’s why I had my head in my hands. AOC said the Supreme Court engaged in an overreach of its authority. Does she have any idea what the Supreme Court’s job is in terms of the Constitution?

“The way they want to pack the court, they’ll make it another legislative branch.

“And what makes them think they’re the majority, by the way?

“What makes them believe that?” she said.

We have a responsibility to protect our democracy. That includes holding those in power who violate the law accountable.

Without it, rule of law can slip through our hands like sand through loose fingers. https://t.co/oT4npgGs2C