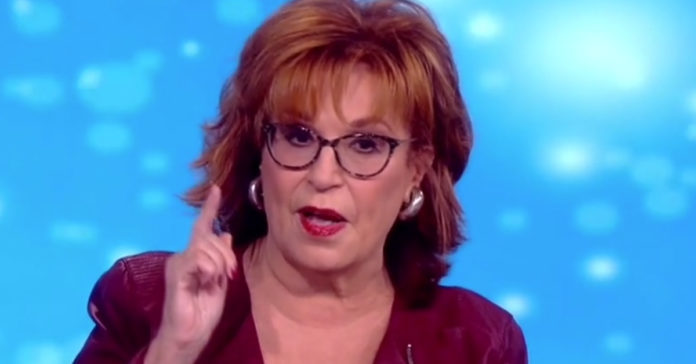 America is begging Joy Behar to follow through on her threat to quit the View…please Joy just do it and leave the Trump bashing to someone else.

Meghan McCain shut down Joy Behar’s Trump bashing yesterday on the View and Joy did not take it kindly. She threw an epic tantrum overheard by the entire studio audience.

This is what started Joy’s bad day. From The Washington Times:

“This president that we have now is trying to unravel everything that he did, and Obama did,” she said of Mr. Trump. “And if I ever become a one-issue voter, it will be about pollution and the greenhouse effect and the fact that—”

“Can we focus on the president, please?” she asked, visibly annoyed. “I don’t want to talk about Trump. We’re honoring a great president’s past.”

“Um, excuse me a second, please,” Ms. Behar fired back. “I want to talk about the difference—”

Ms. McCain interjected again, saying, “I’m not interested in your ‘one issue voter’ when a president just passed.”

“I don’t care what you’re interested in, I’m talking!” Ms. Behar yelled back.

“Well I don’t care what you’re interested in either, Joy!” Ms. McCain responded in kind.

Whoopi stepped in and cut to commercial and Joy was last seen slamming down her cue cards and shouting some obscenity at McCain and issuing her threat.

Thankfully, The Daily Mail had a spy at the show and now we know what went down.

Behar was then seen slamming her cue cards on the table and turning to sound off on McCain just as producers cut to break. Producers muted Behar’s microphone so that her expletives would not be heard on air.

But the source told DailyMail.com that Behar threw her hands in the air, yelled ‘My God!’ and ‘Get this b***h under control.’

‘If this s**t doesn’t stop I’m quitting this damn show. I can’t take this much more,’ Behar allegedly fumed.

Producers ran to the stage in an attempt to de-escalate the situation, but Behar continued to rant, the source said.

‘I’ve tolerated a lot of s**t on this show but I’m at my wits’ end with this entitled b***h. Enough already! Enough already! I’m not playing nice any longer,’ Behar shouted, despite the studio audience being able to hear it all.

‘Everyone was frantic. The last thing they wanted was for Joy to walk off the show. She’s done that before. Remember the Bill O’Reilly situation? She appeared just as disgusted as she did that day and they only had two minutes to contain this explosion on set and get everyone positioned to return for the next live segment. It was utter chaos on set,’ the source said.