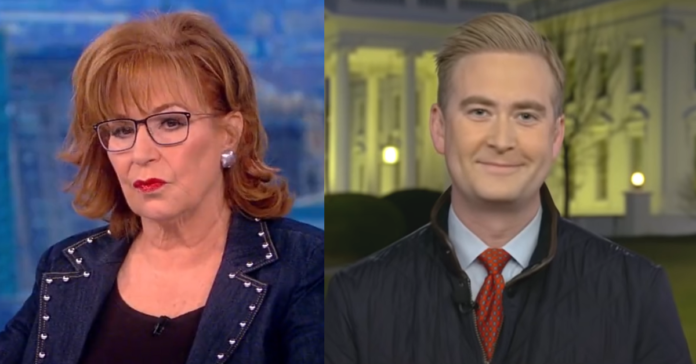 Behar said: “I always noticed how Peter Doocy from Fox News gave Jen a hard time. You know, he asks questions that are directly given to him from Fox. Have you had to swat him down much yet?

“How do you, how are you handling the disingenuous and ridiculous takes when you’re up there trying to do your job and inform the public?”

“So can I say, Joy, and I say this sincerely, the fact that I’m standing here on the White House North Lawn, in the booth, the ABC booth, talking to all of you, is an honor.

“Look, the give and take that I have with the press, I enjoy it. I appreciate it.

“It is part of the job. And it is something that, that I am looking forward to continue to doing.

Behar said: “Is that what they call it?”

Fox News has said they do not give Doocy questions as if that mattered.

And Joy misses the larger point, Psaki enjoyed dealing with Doocy, they were always respectful to each other.

And team Biden made a conscious decision to engage with Doocy early in his first term because they wanted to reach Fox News viewers.

JOY BEHAR: "How do you make the case to voters that [Biden's] economic policies are working? That it’s not his fault?"

SCOTUS STRIKES DOWN NY CONCEALED GUN LAW: #TheView reacts to the Supreme Court ruling to allow New Yorkers to carry concealed firearms, striking down a century's old state law that regulated them and required citizens to prove due cause to conceal and carry. pic.twitter.com/0hWfWQDq7Z

.@PressSec to @TheView on SCOTUS gun ruling: "I can't speak specifically to this ruling just quite yet but … this is a president that has done more executive action … on gun reform than any other president in their first year, and so he's going to continue to do the work." pic.twitter.com/1jtN8A6pWR

Elon Musk Overrules Joe Biden, Warns That ‘A Recession In The Near Term Is More Likely Than Not’