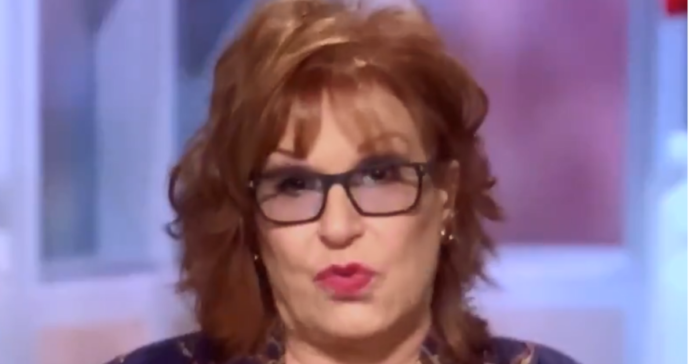 Joy Behar turned in a shocking performance on The View today. She started off by accusing President Trump of lying about catching COVID before predicting doom if Trump wins again.

“It’s so insane out there. I mean, you watch TV, and you see how insane everybody is. You know, the ratings will probably go to the stable genius because people prefer to watch a train wreck rather than watch, you know, say, a course in civics,” Joy said about Biden competing head to head with Trump tonight in dueling town hall debates.

“That doesn’t mean the ratings will translate to votes,: she added hopefully.

“I think NBC is all in for Trump as they were with “The Apprentice,” and the fact that Mark Burnett still has not released a lot of tapes where he probably said some horrific things.”

“NBC, if they really want to do the show, they should put in a laugh track because that is what watching Trump has become.”

“It’s become a comedy show, and unfortunately, people are dying,” she said.

“I just want to make one small point about the fact that I am worried about this election now.”

“It looks like Biden’s going to pull it off, but people should not get complacent. First of all, the Republicans are cheating with unauthorized ballot boxes.”

“Trump is telling his militias to, you know, stalk people at the polling booths, intimidate the voting.”

“There’s a lot of enthusiasm among these white non-college people who love him, and there are more Republican voters who are signing up in swing states.”

She added, “I especially when they own the Supreme Court, and God forbid they take the Senate again, we’re doomed. We’re doomed. People better go out there and vote. That’s all I have to say.”

“I am worried about this election now,” she adds. “It looks like Biden’s going to pull it off, but people should not get complacent!” https://t.co/f8u2wbJuik pic.twitter.com/eUcdLjbOQZ