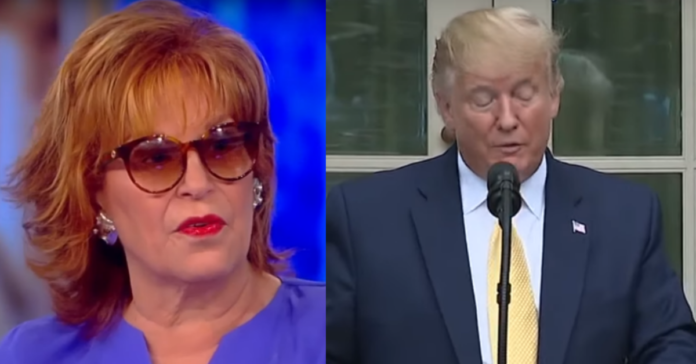 Joy Behar just reached a hysterical new low. She lashed out at President Trump on the View over the planned ICE raids this weekend.

Believe me, if Obama’s ICE agency was conducting these raids she would not say a word. In fact, the media and the left were mostly silent when Obama deported mass amounts of illegal immigrants.

They never said a word when Obama had to get tough when he faced a similar flood of migrants and families at our border. Not one word about the cages he had to put children in when faced with the extraordinary emergency, remember that.

From The Western Journal: “So here’s another outrage for you — there are reports today that Trump intends to move forward with his immigration raids targeting migrant families this weekend,” Behar said to Bennet.

“I thought it was supposed to be gangs coming from these places, not families with children. He’s gonna raid these people’s houses and what have you, and it’s very reminiscent of Nazi Germany, just saying.”

“I know you’re not supposed to make that connection, but I’ve been around long enough and read enough to know that this is very similar to what happened to the Jews — go in and take them out of their houses,” Behar added. “What are the Democrats going to do?”

Bennet, who appeared to have a forced, straight face while Behar made the sickening comparison, replied, “Well, we need to stand up to him.”

“Look, my mom and her parents were Polish Jews who survived the Holocaust. She was separated from her family during the course of the war,” he said.

“I’m not equating the Holocaust to this, but I do know something about what happens to somebody permanently if they’ve been separated,” Bennet added.