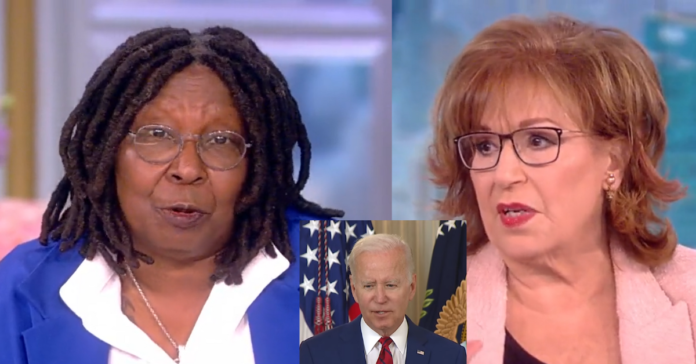 Whoopi Goldberg and Joy Behar tried to defend President Joe Biden on The View and failed miserably. Whoopi said: “America’s largest baby formula company has finally reopened the factory whose shut down caused the nationwide shortage that had millions of parents in a panic, Biden’s Commerce Secretary said the FDA made the right move.

“Let me tell you a couple of things that happened with the plant in Sturgis Michigan, it had unsanitary conditions including a leaking roof, water pooling on the floor, and cracks in production equipment that allowed bacteria to get in.”

She then tried to blame the GOP, “192 Republicans voted against easing the baby formula shortage with 28 million in emergency spending (because they said it did not address the problem).”

Whoopi then tried to blame Trump, because “you know who made sure we can’t get baby formula from Canada here because the trade rules that he put in the US Mexico Canada agreement punish Canadian companies if they export too much baby formula.

“And I don’t understand why Abbott has 49% of the market.”

What Whoopi doesn’t know is that the biggest buyer of this formula is the federal government through the Special Supplemental Nutrition Program for Women, Infants, and Children (WIC) which ‘provides federal grants to states for supplemental foods, health care referrals, and nutrition education for low-income pregnant, breastfeeding, and non-breastfeeding postpartum women, and to infants and children up to age 5 who are found to be at nutritional risk.”

Joy Behar jumped in to defend Biden and trash the GOP:

“You know I think sometimes they (GOP) vote against the best interest of their constituency and against babies in this case.

“Because all they really care about is making Biden look bad.

“That seems to be their M.O. you know, let’s do something to the libs you know, own the libs, and make Biden look bad.

“It’s a vindictive stance, instead of trying to make things better, they like making it worse so that Biden looks bad.

“And by the way, inflation is a worldwide problem, he’s getting blamed for that.

“So you cannot blame the president for every single thing, they will do that.”

Biden gets the blame because he was warned his policies would cause what has happened and he did it anyway.

Today, right now, this very second he could swallow his pride and make nice with the Saudis so they open the spigot but he won’t.

He said they are a pariah and they may be but he needs them and if they won’t do what he wants through diplomacy he needs to do what Trump did when they rebuffed him —  threaten to pull our defenses and leave them on their own.

Biden can use the carrot or the stick to try to lower prices instead he looks lost and does nothing but complain.