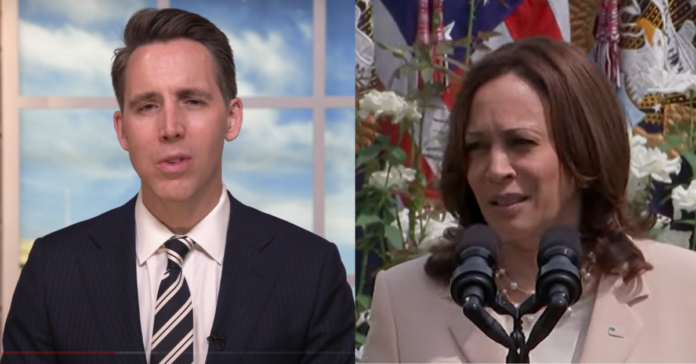 Sen. Josh Hawley (R-MO) introduced a bill Monday to promote patriotism in our schools and to fight back against critical race theory. Hawley introduced the Love America Act that would mandate all schools that receive federal funding ensure students can read and recite America’s founding documents.

Hawley said in announcing his bill: “Over the past year, Americans have watched stunned as a radical ideology spread through our country’s elite institutions—one that teaches America is an irredeemably racist nation founded by white supremacists.

“Now it has found its way into our children’s schools. We cannot afford for our children to lose faith in the noble ideals this country was founded on. We have to make sure that our children understand what makes this country great, the ideals of hope and promise our Founding Fathers fought for, and the love of country that unites us all.

Earlier Hawley criticized CTR on Fox news. He said: “That’s not true. This is a great nation. We’re a nation of liberators.

“It’s time to reclaim that and to teach our children who we are, who they are, and that’s why my bill would say, ‘Listen:

“If a school district gets federal money, you’ve got to teach the basic truth about the country, such as the Constitution, the Bill of Rights, the Declaration, and the Pledge of Allegiance.

“These are the things, the documents, that express the ideals that unite us as Americans. You’ve got to replace the lies with the truth, and that’s what I’m trying to do.”

Republicans have expressed opposition to critical race theory, which holds that the U.S. is inherently racist and that skin color is used to create and maintain social, economic, and political inequalities between whites and nonwhites, saying that the philosophy relegates all white people to the role of oppressors and all people of color to that of victims.

Earlier this month, Sen. Tom Cotton, another vocal opponent of the theory, opened an investigation into defense contractor Raytheon’s use of training materials that promote critical race theory, which he accused of “containing gross stereotypes about various groups including the racial stereotype that black people as a group are ‘exhausted, frustrated, stressed, barely sleeping, scared, and overwhelmed’ … and white people, Christians, able-bodied individuals, straight people, and English speakers, as members of ‘privileged’ groups who have ‘the luxury to ignore … injustices.'”

House Republicans questioned Defense Secretary Lloyd Austin about critical race theory in a June 23 House Armed Services Committee hearing after reports revealed that it and adjacent concepts such as “systemic racism” and “white rage” have been part of course curricula at the U.S. Military Academy.

“This type of teaching, that is rooted in Marxism, that classifies people along class lines, an entire race of people as oppressor and oppressed. I cannot think of anything more divisive and more destructive to unit morale,” said Florida Rep. Michael Waltz, who is himself a former Green Beret.

Austin acknowledged some critical race theory materials may be required reading in some courses but drew a distinction between assigning reading materials and embracing the philosophy.

Wake up, America. The Leftist woke Cancel Culture Mob is coming for you if you dare to stand up to racist Critical Race Theory propaganda. https://t.co/4mX3ZDBpDG