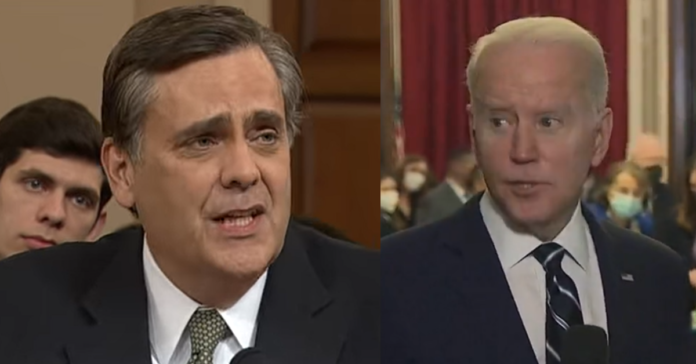 President Joe Biden had a terrible week. He looked lost and angry and ineffectual as he suffered setback after setback. He came across confused at times, but not as confused as Vice President Kamala Harris who can’t get through an easy interview without embarrassing herself and the man who picked her, Joe Biden.

Biden went to Atlanta on a doomed mission to try to pass a new voting bill. He failed miserably but before he did he told another whopper about getting arrested during the civil rights movement.

Biden said: “The struggle to protect voting rights has never been borne by one group alone. We saw Freedom fighters of every race, leaders of every faith, marching arm in arm — and yes, Democrats and Republicans in Congress of the United States and in the presidency.

“I did not live the struggles of Douglass, Tubman, King, Lewis, Goodman, Chaney, Schwerner, countless others known and unknown. I did not walk in the shoes of generation of students who walked these grounds.

“But I walked other grounds, because i’m so damn old I was there as well. They think I’m kidding, man. It seems like yesterday, the first time I got arrested — anyway. But their struggles, here, they’re the ones that opened my eyes as a high school student in the late 50’s and early 60’s. They got me more engaged in the work of my life.”

“Not sure what that is a reference to. Previously, Biden falsely claimed that he was arrested while trying to see Nelson Mandela.

“Politifact gave Biden a “Pants on Fire” rating for his last claim of being arrested. Biden then walked it back but seems to have had that or another arrest in mind today while speaking at Morehouse College.”

“The primary source for this story is Biden — and we’ve learned over the years that he is not always a reliable source.

“He appears to be citing his mother to enhance his civil rights credentials — which we have noted he has exaggerated before — but too many elements do not add up to give this ‘arrest’ more credibility than his previous claims of getting in trouble with the law.”

According to Kessler, Biden appeared to be referencing a story he told on a number of occasions about a conversation he had with his mother in 2008 when deciding whether he should accept former President Obama’s offer to become his running mate.

In the story, Biden’s mother reminded him of when he was a teenager and went to support a Black family who purchased a home in a town not far from where the Biden’s lived amid a protest against the family moving in.

Kessler noted that Biden told the story with several variations over time, with some referencing him getting “arrested” by the police, and others saying they brought him home to his parents to keep him from getting in trouble. Other variations included his age, as well as the protest location.

Kessler added that Biden also never made any mention of the arrest in his memoirs, even when discussing the same conversation with his mother.

…Not sure what that is a reference to. Previously, Biden falsely claimed that he was arrested while trying to see Nelson Mandela. https://t.co/Ewxn64wmA0

…Politifact gave Biden a "Pants on Fire" rating for his last claim of being arrested. https://t.co/bxD4AbK3bx Biden then walked it back but seems to have had that or another arrest in mind today while speaking at Morehouse College. https://t.co/VS2t3y6OoM