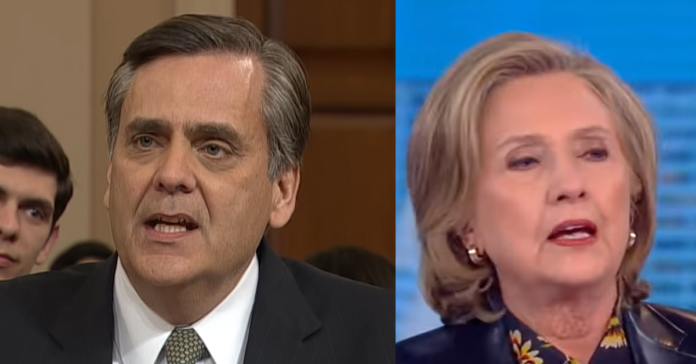 Legal scholar Jonathan Turley gave Hillary Clinton some bad news after John Durham indicted Igor Danchenko on five counts of lying to the FBI and hinted that a PR executive, since identified as close Clinton adviser Charles Dolan, may have had a role in the scandal.

Turley wrote: “Thus, Durham clearly seems to be making a meticulous case that the Steele dossier was a political hit job orchestrated by Clinton operatives. His latest indictment connects Danchenko to several intriguing figures and groups that, in turn, relate to the Clinton campaign.

“Former British spy Christopher Steele himself has been extensively interviewed by investigators over the years — a long record that comes with inherent risks of contradictions.

“Notably, Steele recently defended his dossier in a bizarre interview. While admitting that it might have been used by Russian intelligence for disinformation, he stood by the accounts of its most sensational details, such as former President Trump’s “golden shower tape,” despite Durham’s findings to the contrary.

“Dolan is the latest direct connection between the campaign and the infamous Steele dossier to surface in Durham’s investigation. Dolan had close ties not only to the Clintons but to the Russians as well; he and the public relations firm where he worked had represented the Russian government and registered as foreign agents for Russia.

“Durham alleges that it was Dolan, not Russian sources, who gave Danchenko key allegations to put into the Steele dossier, including some of its most salacious claims.

“Dolan is described as traveling to Moscow to meet with Russian officials who were paying his firm. The connection is notable because American intelligence believed that sources used in the dossier were, in fact, Russian agents and that the dossier may have been a vehicle for Russian intelligence to spread misinformation.

“However, Dolan reportedly admitted to “fabricating” facts given to Danchenko. Dolan’s attorney now describes him as a “witness” in the investigation.

“Danchenko worked for several years at the Brookings Institution, a leading liberal think tank in Washington, as an analyst in Russian and Eurasian affairs — and, as a result, Brookings features prominently in this latest indictment.

“Around 2010, another Brookings employee had introduced Danchenko to Steele, who subsequently retained him as a contract investigator.

“Steele testified in London in a 2019 defamation suit that he had disclosed some of his dossier’s details to Strobe Talbott, then the president of Brookings.

“Talbott had his own longstanding Clinton ties. Among those, he was an ambassador-at-large and a deputy secretary of state under President Clinton; when Hillary Clinton was secretary of State, Talbott was named chairman of the State Department’s foreign affairs advisory board.

“Then there is Hillary Clinton herself. Steele also has testified that it was his understanding that Clinton was aware of his work and the development of the dossier. Yet during the campaign and long afterward, Clinton never admitted that her campaign funded the dossier, despite media and congressional inquiries about that fact. No less an official than campaign chairman John Podesta denied any connection in testimony before Congress.

“More importantly, before the Steele dossier was given to the FBI and the press, then-CIA Director John Brennan briefed former President Obama on Clinton’s alleged “plan” to tie candidate Trump to Russia as “a means of distracting the public from her use of a private email server.”

“Now, with Danchenko’s indictment, Dolan’s name has been added to a seemingly growing array of Clinton associates whom Durham has referenced in the development of the Russia collusion scandal,” he wrote.