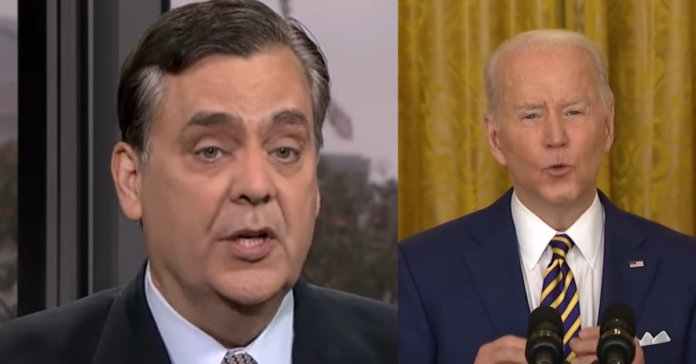 George Washington University Law School professor Jonathan Turley warned President Joe Biden that his requirement for his SCOTUS pick, that she be black and female, is “unconstitutional” in other cases according to the Court itself.

Turley wrote: “In his debate with Bernie Sanders, Joe Biden made two pledges to voters and asked his opponent to do the same to nominate only a black woman for the next open Supreme Court seat and to choose a woman as his vice president. Even with identity politics, the pledge to impose a gender and race requirement for the next Supreme Court nominee is as ironic as it is troubling.

“The pledges that Biden has made amount to this. No matter how qualified men or, in the case of the Supreme Court, women who are not black may be, he will not consider them as candidates. In the case of vice president, such gender discrimination would be allowed, as presidential candidates can select a running mate on any grounds and voters can decide if they approve.

“Justices, however, are lifetime appointees, and presidents have always been careful to state that, while they seek diversity among their nominees, they would appoint the most qualified person regardless of race, religion, gender, or sexual orientation. But in a single declaration, Biden quickly dispensed with even the pretense of equal consideration.

“Imposing an absolute requirement that a nominee be a particular gender and race is effectively an affirmative action pledge. It is precisely what the Supreme Court already declared to be unconstitutional discrimination.

“In the 1977 case of Regents of the University of California versus Allan Bakke, the Supreme Court found quota and affirmative action admissions policies based on race to be unconstitutional. While the justices were fractured on the logic, a clear plurality on the bench supported the view that preferring “members of any one group for no reason other than race or ethnic origin is discrimination for its own sake,” adding “this the Constitution forbids.”

“The Supreme Court handed down decisions over the next 20 years that struck down admissions policies that directly or indirectly used race as a critical element. It continued to allow race and gender to be used as part of an overall effort to promote diversity so long as it was not the emphasis or overriding criteria.

“That is precisely the position of past presidents, and Sanders, in saying that they want greater diversity without declaring that men or those who are not black will not be considered, as Biden pledges.

“Biden has taken the position that he will not consider any candidate who is a man or a woman who is white, Asian, Hispanic, or other minority that is not black, no matter how qualified. He would not consider a nominee like Ruth Bader Ginsburg because of the color of her skin.

“He would not consider Thurgood Marshall because of his gender. Louis Brandeis and Oliver Wendell Holmes would be two-time losers under this policy. Indeed, this is just ironic for those four members of the Supreme Court who have voted consistently to uphold admissions policies based on race. Now their own bench could be the subject of a threshold selection not based on merit.

“Particularly disappointing is what this policy says about the way in which Biden views the most important criteria for justices. The Supreme Court has always been treated as the place for the best legal minds who stand objectively above their peers in intellect and abilities.

“I have been critical of the past failures to nominate such leaders. There is no doubt here that identity politics played a role in some nominations, but presidents have at least maintained an appearance of their selections based purely on merit.

“Biden now also belittles those minority jurists who can compete for the Supreme Court without an assurance that no whites or other women will be considered. In the name of diversity, Biden embraces discrimination.

“The Supreme Court denounced such rationalizations as harming minority groups, concluding that they would “only reinforce common stereotypes holding that certain groups are unable to achieve success without special protection based on a factor having no relationship to individual worth.”

“The Supreme Court rejected an admissions policy that would simply give an enhancement score for “underrepresented minorities” in its decision in the 2003 case of Jennifer Gratz versus Lee Bollinger.

“The majority noted that “individualized review is only provided after” the group is designated for special consideration. In this instance, however, Biden would go even further and designate the group for exclusive consideration in his policy.

“The policy that Biden has taken goes far beyond that case and, if he used it, would come around the time when O’Connor foresaw the end of racial preferences in admissions.

“It would turn out that, roughly 25 years later, the Supreme Court would actually witness, not an end to race or gender preferences in admissions, but the application of such criteria for itself,” he wrote.

Jen Psaki just reaffirmed that the President will only consider a black woman for the next nomination — a threshold gender and race condition that the Court itself has found unconstitutional for schools and unlawful for private businesses. https://t.co/uzc5jInAlg