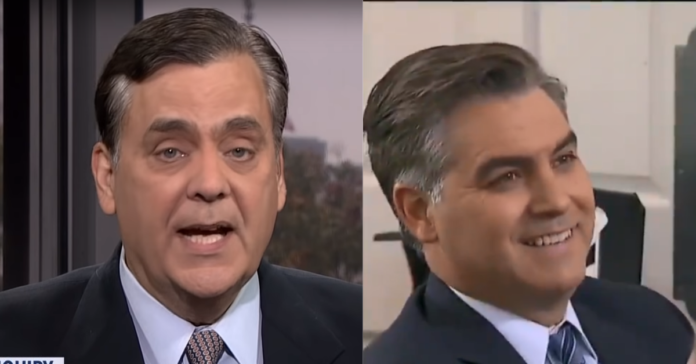 Jonathan Turley just calls out CNN’s Jim Acosta and exposed him for all to see as an anti-Trump hack. Turley wrote:

“There was a telling moment of dissonance on CNN this week, a network that is now unrelenting in its negative and highly partisan coverage of the Administration.  CNN’s White House reporter Jim Acosta has been repeatedly called out for such bias and sent out a clearly misleading tweet bashing White House press secretary Kayleigh McEnany.  Meanwhile, CNN host Jake Tapper set the record straight in fairness to McEnany.  While I have occasionally criticized Tapper, I have more often praised him for his professionalism and intellect. This is why. This is what CNN was once and, with the help of figures like Tapper, it could be again: an honest and objective news organization.

In Thursday’s briefing, McEnany repeated President Trump’s call for children to go back to school in the fall. “The science should not stand in the way of this, but as Dr. Scott Atlas said — I thought this was a good quote, ‘Of course, we can do it. Everyone else in the Western world, our peer nations are doing it. We are the outlier here.’

The science is very clear on this. For example, you look at the JAMA pediatric study of 46 pediatric hospitals in North America that said the risk of critical illness from COVID is far less for children than the seasonal flu. The science is on our side here. We encourage localities and states to just simply follow the science. Open our schools.”

She is clearly citing the science as supporting the position of the Administration. However, Acosta clipped the statement to make it sound like McEnany was dismissing the relevance of science:  “The White House Press Secretary on Trump’s push to reopen schools: ‘The science should not stand in the way of this.’”

That was clearly and absolutely false.  However, Acosta knew that it would play well in the eco-journalistic model adopted by CNN.  He quickly racked up 30,000 retweets.  He then later added that McEnany actually meant the opposite. That received less than 700 retweets. It is the ultimate example of the demand of many viewers to only hear news that supports their own bias and adds to a type of journalistic comfort zone.

To Acosta’s credit, he sent out the second tweet, but saying “McEnany went on to say ‘the science is on our side here’” does not quite capture the scene.  The quote was McEnany referring to a scientific study and, right after the line quoted, McEnany said “The science is very clear on this.” She then two lines later added “The science is on our side here.” The entire quote was McEnany raising a scientific study that supports their position.  It is akin to a McEnany saying “National security is not relevant because the Defense Department report supports this policy” only to have Acosta tweet “The White House Press Secretary: “National Security is not relevant” in White House policy.

Over at CNN headquarters however Tapper stepped out of that comfort zone and corrected CNN’s chief medical correspondent Dr. Sanjay Gupta after he repeated the same false narrative that McEnany was having an “alternative facts kind of moment.”

Tapper responded: “If I could just say, Sanjay,. I think she was just trying to say that the science shouldn’t stand in the way because the science is on our side. I don’t know that all of the science is on their side- and certainly, this White House, their respect for science knows bounds, let’s put it that way, but I think that’s what she was getting at.”

That is why I remain a fan of Tapper.

I have many friends still at CNN who privately lament the changes under President Jeff Zucker, who admitted that the unending focus on Trump was part of his effort to boast ratings.  It is often impossible to distinguish CNN hosts from advocates on their programs. Hosts now engage in open advocacy against the President — discarding with the pretense of having a guest take a partisan position.  I truly miss the old CNN.  Many people feel that there is simply no source of objective news in this environment and are turning off the coverage.  The loss to journalism is immense.  Indeed, if anything, it may be driving people to Trump.

The White House Press Secretary on Trump's push to reopen schools: "The science should not stand in the way of this."