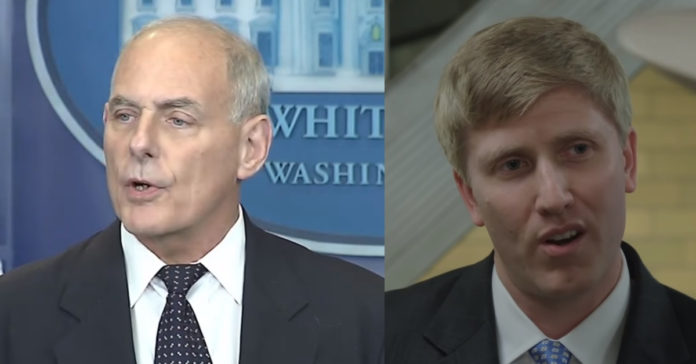 We all knew this was coming and now we know when it will happen – John Kelly is out as Trump’s chief of staff and it looks like Nick Ayers will replace him.

According to Fox News, Kelly will be gone by the first of the year and Trump will name his replacement (Ayers) in the coming days.

From Fox News: “John Kelly will be leaving at the end of the year, we will be announcing who will be taking John’s place, it might be on an interim basis, I’ll be announcing that over the next day or two,” he said.

“I appreciate his service very much,” he added.

Kelly, who previously served as Department of Homeland Security secretary, was widely reported to have been considering leaving his post. Trump had previously said Kelly would stay until 2020. The announcement comes amid a wider shakeup of staff by President Trump. On Friday, he announced that he had picked William Barr for attorney general and Heather Nauert for U.N. ambassador.

Kelly, 68 moved over to the White House in July 2017 to replace former Republican National Committee Chairman Reince Priebus as chief of staff.

The retired four-star Marine Corps general has joked publicly that working for Trump is the hardest job he’s ever had, including those on the battlefield.

Kelly has brought order to a chaotic White House, which has seen a historically fast turnover in multiple high-profile jobs—like White House communications director, national security adviser, and more. Kelly’s role, though, has lessened in recent months as the president has instead followed his own counsel, and added like-minded aides to his staff.

From The Washington Examiner: President Trump appears poised to make Nick Ayers his third chief of staff as he prepares for re-election, replacing John Kelly with a wunderkind political operative whose confident, no-nonsense manner has ruffled feathers but also stirred admiration.

Trump is poaching the 36-year-old Ayers from Vice President Mike Pence, for whom he has served as chief of staff since the summer of last year.

Beginning in his early 20s, Ayers served as campaign manager on gubernatorial and presidential campaigns, directed the Republican Governors Association, worked on the Trump-Pence 2016 operation, and advised several Republican candidates over the years as an outside consultant.

Ayers has a demanding management style that often chafed older subordinates. But his fans say he has proven himself a smart, effective political tactician.

“He’s very results-oriented. He doesn’t have a lot of patience for people who don’t pull their weight, and he’s a very strategic thinker,” said Alex Conant, a GOP strategist who worked with Ayers in 2012 on Mike Pawlenty’s short-lived bid for the Republican presidential nomination, and who counts himself a fan. “He’s been young for every job he’s ever had and he’s risen very quickly. Some people may not feel like he’s paid his dues.”

Ayers’ trademark assertiveness was on display last year, when he told a gathering of GOP donors that Republicans who don’t unequivocally support Trump’s agenda should be purged from Congress. He urged the donors to spend money to bankroll GOP primary challengers for Republican incumbents who don’t get with the Trump program. Such remarks are rare for staffers, even those in senior positions, like chief of staff to the vice president.