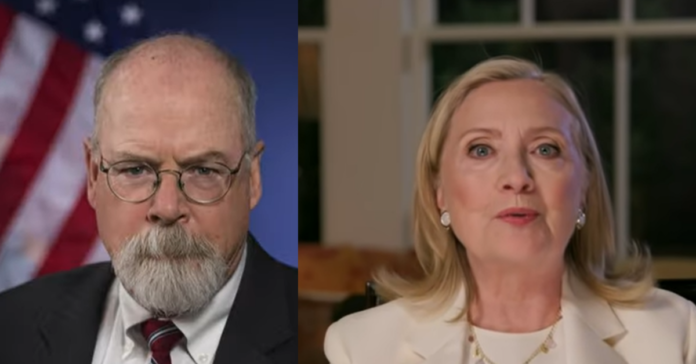 In terrible news for Hillary Clinton and her team, Special Counsel John Durham is closing in on possible criminal behavior surrounding the origins of the Trump Russia probe. Durham is focusing on whether someone lied to the FBI and gave them false evidence.

According to multiple media accounts, Durham has been very busy with his grand jury seeking documents and witness testimony. If someone, say Chris Steele or someone working for Hillary and the DNC, gave the FBI fabricated or exaggerated evidence to jumpstart the investigations that could be a crime.

“It has struck me from the start as a fool’s errand at best, and a political task at worst, but to shut it down would give the appearance of political interference that would be unwise,” said former U.S. attorney Barbara McQuade.

Steele had been hired to look into Trump by an opposition research group working for the law firm representing Hillary Clinton’s 2016 campaign and the Democratic National Committee.

Durham’s most recent inquiries, people familiar with the matter say, have focused in part on the authenticity of data given to the FBI about alleged cyber links between the former president’s company and Alfa Bank of Russia — a theory pushed to journalists by some computer scientists in the fall of 2016 on the basis of purported server connections they had discovered.

The theory — which generated public pushback after it was published by Slate — essentially posited that Domain Name System lookups from Alfa Bank servers to a server with a Trump Organization-linked domain could signal a secret communications channel.

One of the researchers told the New Yorker in a story published in 2018 that his lawyer passed along the data to the FBI.

Michael Sussmann, a Perkins Coie lawyer whose firm represented the DNC and the Clinton campaign, testified to the House Intelligence Committee in December 2017 that he talked with the FBI’s then general counsel, Jim Baker, in September 2016 about the information. Baker testified that he referred the matter to investigators.

The AP reported last week: John Durham, the federal prosecutor tapped to investigate the origins of the Russia investigation, has been presenting evidence before a grand jury as part of his probe, a person familiar with the matter said Friday.

The development is a potential sign that Durham may be mulling additional criminal charges beyond the one he brought last year against a former FBI lawyer who admitted altering an email about a Trump campaign aide who’d been under FBI surveillance. Durham is also expected to complete a report at some point.

Three months ago, the Justice Department issued a statement indicating that #JohnDurham had spent $1.5 million between October 2020 and March 2021—far less than what the #MuellerInvestigation spent.

The @WSJ reported earlier Friday that Durham was presenting evidence to a Grand Jury and contemplating possible charges against some FBI employees and others outside government. https://t.co/wSIB3Gm9tU