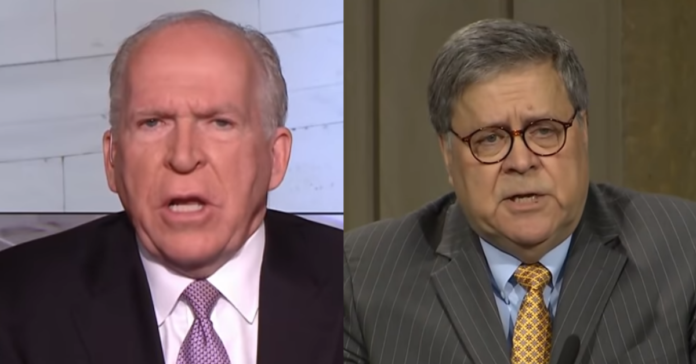 “There was definitely Russian, uh, interference,” Bill Barr said in June. “I think Durham is looking at the intelligence community’s ICA — the report that they did in December 2016. And he’s sort of examining all the information that was based on, the basis for their conclusions. So to that extent, I still have an open mind, depending on what he finds.”

Today we find that the Durham probe is winding up and John Brennan will testify in the investigation into what in the hell happened in 2016.

This is not good news for Brennan and others who have been fiercely anti-Trump in their tone, rhetoric, and actions. We will soon find out if they crossed the line and committed criminal acts in the zeal to take down Trump.

The investigation ordered by Attorney General William Barr into how the CIA and the FBI looked into the Trump campaign’s connections to Russia’s 2016 election interference operation may be nearing a conclusion, people familiar with it say.

One indication is that the prosecutor in charge, Connecticut U.S. Attorney John Durham, has asked to interview former CIA Director John Brennan, according to a person familiar with the request. Brennan has agreed to be interviewed, and the details are being worked out, the person said.

Attorney General William Barr told Congress last month that he would not wait until after the election to present Durham’s findings if they are finalized.

Barr has made clear he believes Obama administration officials acted wrongfully when they opened a counterintelligence investigation into the Trump campaign’s dealings with Russians, but the Justice Department’s inspector general found that the investigation was justified and untainted by political bias.

Brennan, a vocal critic of Trump and an NBC News analyst, has been the subject of intense scrutiny by Durham. Brennan was director of the CIA from 2013 until the day of Trump’s inauguration. The New York Times reported in December that the prosecutor was reviewing Brennan’s emails, call logs and other records, which was confirmed to NBC News by a person familiar with the matter.

Durham is looking into whether Brennan took politicized actions to pressure the rest of the intelligence community to match his conclusions about Russian President Vladimir Putin’s motivations, according to sources cited by the Wall Street Journal.

These sources said Durham has been interviewing CIA officials this year, focusing on the National Intelligence Council, a center within the Office of the Director of National Intelligence, which oversaw the collaboration between the CIA, FBI, and National Security Agency in putting together the 2017 Intelligence Community Assessment on Russian meddling. Barr confirmed Durham is scrutinizing the assessment.

“There was definitely Russian, uh, interference,” Barr said in June. “I think Durham is looking at the intelligence community’s ICA — the report that they did in December [2016]. And he’s sort of examining all the information that was based on, the basis for their conclusions. So to that extent, I still have an open mind, depending on what he finds.”

The 2017 assessment concluded with “high confidence” that Putin “ordered an influence campaign in 2016,” and Russia worked to “undermine public faith” in U.S. democracy, “denigrate” former Secretary of State Hillary Clinton, “harm her electability and potential presidency,” and “developed a clear preference” for Donald Trump.

The NSA diverged on one aspect, expressing only “moderate confidence” that Putin actively tried to help Trump win and Clinton lose.

The Senate Intelligence Committee released a report in April defending the intelligence community assessment, saying that Senate investigators found no evidence of political pressure to reach a specific conclusion and determining that the assessments by the CIA, FBI, and NSA present “a coherent and well-constructed intelligence basis for the case of unprecedented Russian interference in the 2016 U.S. presidential election.”