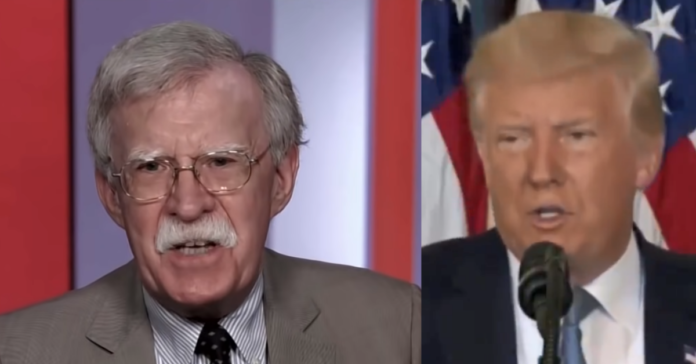 John Bolton is vehemently disputing the bombshell story about Trump disparaging the troops. “According to what that article said the president made disparaging remarks about our soldiers, the people buried at the Aisne-Marne cemetery in connection with the decision for him not to go to the ceremony that was planned that afternoon and that was simply false,” he said.

“I don’t know who told the author that but that was false and I recounted that in my book, ‘Room Where It Happened’ and reaffirmed that in response to questions, the next day.”

“Well, she’s just flatly wrong,” Bolton said. “Look, I can tell you exactly what it was. We were in the Ambassador’s residence in Paris.”

“We were supposed to be having a 10:30 meeting to brief the president for his meeting with French President Emmanuel Macron at 11.”

“The president was late, which was frequently the case. I don’t think the entire fair lasted more than 10 or 15 minutes and the main issue was whether or not weather conditions permitted the president to go out to the Aisne-Marne cemetery.”

“The people I recall being there were John Kelly, one of his aides, Mike Pompeo, myself, Jamie McCourt, our ambassador to France.”

“We had this discussion, it was mostly John Kelly presenting the logistical reasons why the trip couldn’t take place and the president assented to the recommendations that he not go,” Bolton said.

“He didn’t protest that he really needed to go. He just sort of took the facts as they were, a very straight weather call.”

“After that meeting just for what it’s worth, we then went to the Elysee Palace for the President to meet with Macron.”

“That lasted until about 12:45. The two presidents were joined by the two first ladies for lunch, just the four of them that lasted into the afternoon.”

“The president then went back to the embassy and a dinner that night for the heads of state who were attending and that was the schedule that day.”