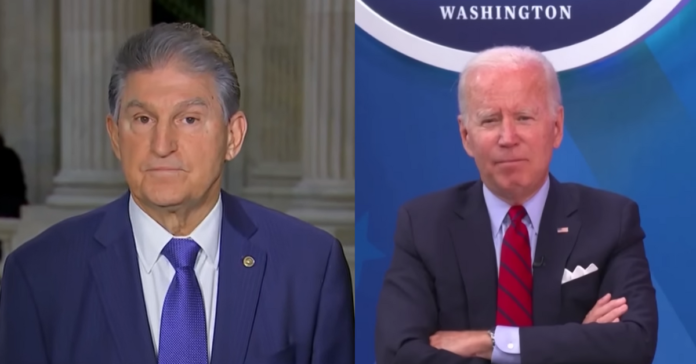 Dem Senator from West Virginia Joe Manchin told President Joe Biden to go pound sand and will defy Biden’s call to codify abortion rights into law by using a filibuster carveout to get around Republican opposition in the Senate.

Biden and the Dems want to do it even if it means the end of the filibuster, which the Dems have used very effectively over the years. Biden said:

“I believe we have to codify Roe v. Wade into law. And the way to do that is to make sure Congress votes to do that. And if the filibuster gets in the way, it’s like voting rights, it should be—we provide an exception for this, should require an exception to the filibuster for this action, to deal with the Supreme Court decision.”

But Biden needs 50 votes and he does not have them because Joe Manchin and Arizona Senator Kyrsten Sinema are not on board.

“Senator Manchin’s position has not changed,” said Sam Runyon, spokeswoman for the senator.

Manchin did say he would like to see bipartisan legislation that would codify abortion rights.

“I am deeply disappointed that the Supreme Court has voted to overturn Roe v. Wade. It has been the law of the land for nearly 50 years and was understood to be settled precedent.

“I trusted Justice Gorsuch and Justice Kavanaugh when they testified under oath that they also believed Roe v. Wade was settled legal precedent and I am alarmed they chose to reject the stability the ruling has provided for two generations of Americans.

“As a Catholic, I was raised pro-life and will always consider myself pro-life.

“I believe that exceptions should be made in instances of rape, incest and when the life of the mother is in jeopardy.

“But let me be clear, I support legislation that would codify the rights Roe v. Wade previously protected.

“I am hopeful Democrats and Republicans will come together to put forward a piece of legislation that would do just that,” he said.

Sinema reminded Dems that the filibuster saved Roe v Wade for many years as the GOP would have passed a national law outlawing abortion when they had enough control in DC.

“A woman’s health care choices should be between her, her family, and her doctor. Overturning Roe v. Wade endangers the health and wellbeing of women in Arizona and across America.

“Protections in the Senate safeguarding against the erosion of women’s access to health care have been used half-a-dozen times in the past ten years, and are more important now than ever.

“Throughout my time in Congress, I’ve always supported women’s access to health care, I’m a cosponsor of the Women’s Health Protection Act, and I’ll continue working with anyone to protect women’s ability to make decisions about their futures.”

Sen. Kyrsten Sinema’s office says the Democratic senator is still opposed to gutting the filibuster on any topic including on reproductive rights.