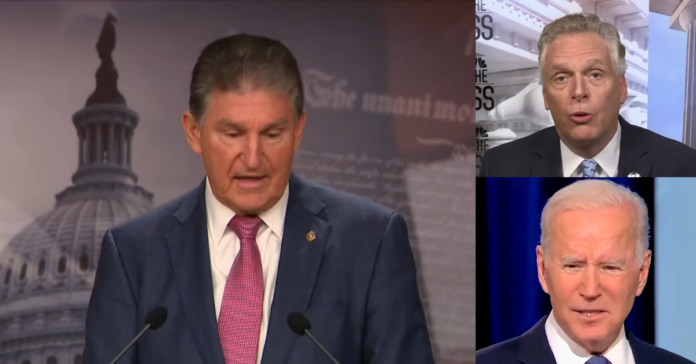 Dem Senator Joe Manchin broke his silence on the Dems wipeout last night calling the losses, both at the top of the ticket and down-ballot, “unbelievable” before warning Dems they are scaring people with their proposals.

He said: “It’s unbelievable to see what went on in Virginia and not just from the governor’s race but all the way down that ticket a good bit of change has happened.

“You can read so much into all of that last night. I think it should be a call to all of us have to be more attentive to the people back home. I’ve been saying this for many, many months, people have concerns, people are concerned.

“And for us to go down a path that we’ve been going and trying to accelerate it and it has been slowed down – I think we need to take our time and do it right.

“We have a divided country that needs to be united and you can’t unite it by just doing it by one-party system.

“We need to be cognizant of that,” he said about America’s concerns of overspending and inflation.

He added, “We just can’t just say look we can do this, this and this and it will take care of it. We’ve got to be very careful.”

The rest of the Democrats instead of heeding Manchin’s warning are doubling down and are adding things to the reconciliation bill, things Manchin said he would not support.

“Only in Washington, do people think that it is a smart strategy to take a once-in-a-generation investment in infrastructure and prevent your President from signing that bill into law. And that’s somehow a good strategy.

“So the last couple months, I’ve been appealing to my Democratic colleagues, let’s get the President the infrastructure bill, not only in terms of the substance, but also in terms of showing that we can govern in a pragmatic, practical way.

“You can’t win in Virginia if you only appeal to very liberal voters.”

"We have a divided country that needs to be united, and you can't unite it by just going by a one-party system."

“I think it’s going to send a signal that we’ve got to produce. The American public gave us a majority of both houses for a reason. We’ve got to get results for people. But if we argue amongst ourselves, and we don’t produce, that puts us at risk"https://t.co/5vC4nQ2sgN

Mark Warner, reacting to his party's losses in Virginia: “Only in Washington, do people think that it is a smart strategy to take a once-in-a-generation investment in infrastructure and prevent your President from signing that bill into law. And that's somehow a good strategy."