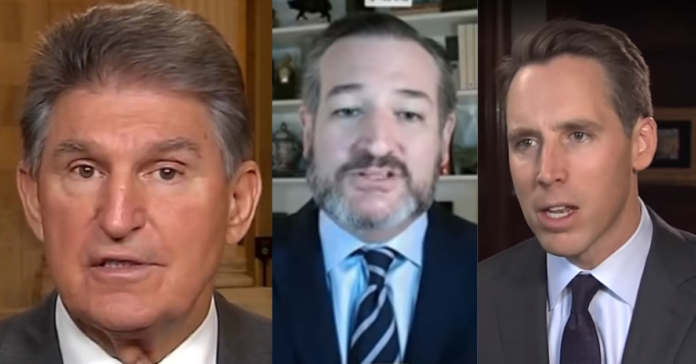 “That should be a consideration,” Manchin said when asked if the 14th Amendment should be used to remove the two Senators.

“He understands that. Ted’s a very bright individual, and I get along fine with Ted, but what he did was totally outside of the realm of our responsibilities or our privileges.”

“I’m totally convinced it was done because of political reasons. This was all politically motivated. This was calculated,” said Manchin.

“I believe that all my colleagues truly made a decision that was politically best for them and expedient for them. It was not what they believed to be true or false.”

“I looked at Josh, and I said, ‘Josh, you have a right to do what you’re doing, but think of what’s happening, what you’re seeing on the monitors.”

“There wasn’t much conversation back and forth on that. He listened to me, and I could tell it was weighing on him, and I was hoping that we were able to maybe change his mind to go up there and stop his objections.”

The third section of the 14th Amendment reads that no lawmaker holding office “shall have engaged in insurrection or rebellion against the same, or given aid or comfort to the enemies thereof.  But Congress may by a vote of two-thirds of each House, remove such disability.”

Critics of Hawley and Cruz, who led the effort in the Senate to object to the presidential election results in Arizona and Pennsylvania, said the amendment applies to the two senators, whom they blame for inciting the riot with their rhetoric echoing concerns of election fraud and irregularities.

Last week’s mayhem resulted in the deaths of five people, including a Capitol Police officer and a rioter who was shot by another officer while trying to breach a window in the building.

Several Democrats have called for the two senators’ resignations, while Republicans have rebuked them for their objections, which Sen. Ben Sasse (R-Neb.) called “dumbass.”