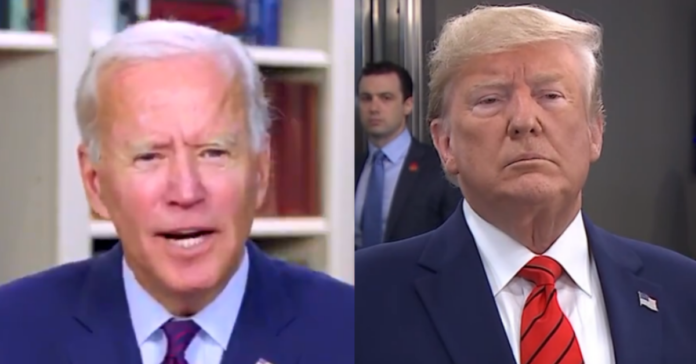 “Earlier today, I made some comments about diversity in the African American and Latino communities that I want to clarify. In no way did I mean to suggest the African American community is a monolith—not by identity, not on issues, not at all, Joe Biden said trying to clean up after another flub.

“I just watched the clip, and Joe Biden, this morning, totally disparaged and insulted the black community,” Trump told reporters today. What he said is incredible,’ the president continued. ‘And I don’t know what’s going on with him, but it’s a very insulting statement he made.”

By Thursday evening Biden had responded to the criticism. He did not use the word ‘sorry’ but added: ‘Throughout my career I’ve witnessed the diversity of thought, background, and sentiment within the African American community. It’s this diversity that makes our workplaces, communities, and country a better place.

…During that same interview, Biden stunned Garcia-Navarro’s co-interviewer CBS News’ Errol Barnett when he made the comment ‘Are you a junkie?’

The remarks came after the former vice president said he would not take a cognitive test despite goading from Trump that his Democratic rival wouldn’t be able to beat his score.

‘Mr. Vice President, your opponent in this election, President Trump, has made your mental state a campaign topic,’ Barnett posed. ‘Have you taken a cognitive test?’

‘No, I haven’t taken a test. Why the hell would I take a test?’ Biden said to Barnett during the interview, which aired in full Thursday, but clips were released Wednesday.

‘Come on man. That’s like saying, before you got in this program, did you take a test where you’re taking cocaine or not. What do you think? Huh? Are you a junkie?,’ the presumed Democratic nominee added with a laugh.

Barnett appeared confused by the response.

‘What do you say to President Trump, who brags about his test and makes your mental state an issue for voters?’ Barnett asked.

‘Well, if he can’t figure out the difference between an elephant and a lion, I don’t know what the hell he’s talking about,’ Biden said.

The Montreal Cognitive Assessment, the test in question, is a ten-minute test of cognitive abilities, which includes a question where it has the taker identify an animal such as an elephant, lion or camel – but the president assured that the further along the test goes, the harder it gets.

Trump bragged he has ‘aced’ the cognitive test and has challenged Biden to take it, claiming he wouldn’t pass.

‘Joe should take that test, because something’s going on. And, and, I say this with respect. I mean — going to probably happen to all of us, right? You know? It’s going to happen,’ he told Fox News last month.

Joe Biden in his own words:pic.twitter.com/iUgkk2uSJo