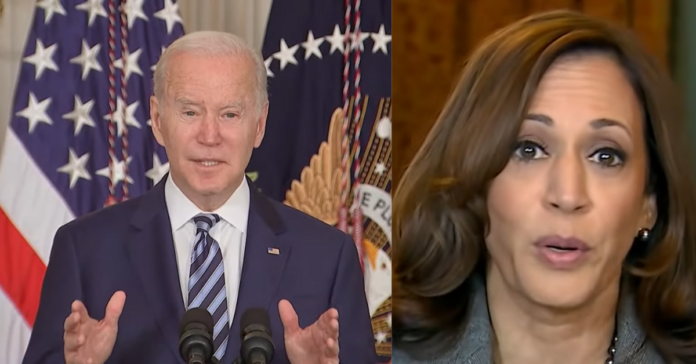 President Biden will transfer power to Vice President Kamala Harris Friday morning when he is under anesthesia for a “routine” procedure at Walter Reed Medical Center the White House confirmed.

The left is typically celebrating the moment of national terror (could Kamala be any worse than Joe?) by saying she is making history forgetting that is a meaningless thing like passing a bill that can’t pass the Senate. Biden arrived at 8:51 a.m. ET. White House press secretary Jen Psaki said Biden will undergo a colonoscopy.

“As was the case when President George W. Bush had the same procedure in 2002 and 2007, and following the process set out in the Constitution, President Biden will transfer power to the Vice President for the brief period of time when he is under anesthesia,” Psaki said.

CNN’s Daniella Diaz said, “President Joe Biden will receive a routine colonoscopy today while he is undergoing a physical at Walter Reed.

“The process, which requires anesthesia, means that he will temporarily transfer power to Kamala Harris, who will briefly become the 1st woman President.”

The transfer of power falls is covered in Section 3 of the 25th Amendment to the U.S. Constitution: “Whenever the President transmits to the President pro tempore of the Senate and the Speaker of the House of Representatives his written declaration that he is unable to discharge the powers and duties of his office, and until he transmits to them a written declaration to the contrary, such powers and duties shall be discharged by the Vice President as Acting President.”

The nation’s first female, first Black and first South Asian vice president will break yet another barrier when she temporarily steps into the acting role. Harris will work from her office in the West Wing while Biden is under anesthesia, Psaki said in a statement.

It’s routine for a vice president to assume presidential powers while the president undergoes a medical procedure that requires anesthesia.

US Vice-President Kamala Harris to become first woman to be given presidential powers while Joe Biden is under anaesthesia for routine colonoscopy https://t.co/nruNhVNJBv

Letter from @POTUS temporarily transferring powers of the presidency to @VP pic.twitter.com/qzr3pkUjm3

.@POTUS spoke with @VP and @WHCOS at approximately 11:35am this morning. @POTUS was in good spirits and at that time resumed his duties. He will remain at Walter Reed as he completes the rest of his routine physical.