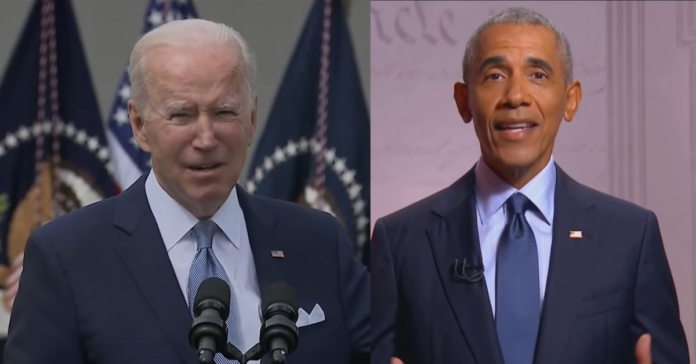 President Joe Biden spilled the beans about his plans for the 2024 presidential election to Barack Obama telling the former president that he will run again in 2024.

“Biden wants to run and he’s clearly letting everyone know,” said one of the sources. But with Biden’s low approval numbers he can expect, if history is a guide, to be challenged in a Dem primary as other candidates smell his weakness a mile away.

“A lot will depend on the outcome of the midterms. If Democrats don’t fare very well, he’ll be going into 2024 from a position of weakness, if you will.”

“I’m a great respecter of fate,” Biden said in December about his future plans.

“Fate has intervened in my life many, many times.

“If I’m in the health I am in now, if I’m in good health, then in fact I would run again.”

Asked if he would run if it meant going head to head with former President Doald Trump Trump, Biden said:

“You’re trying to tempt me now.

“Sure. Why would I not run against Donald Trump if he were the nominee?

“That would increase the prospect of running,” he said.

Now, as Biden’s relationship with the left has come under strain, liberals are talking about treating him like former President Jimmy Carter instead — and mapping out a Democratic primary challenge in 2024.

Weaver stresses that he is not advocating for such a primary campaign. But the chatter about a left-wing challenge to Biden, which was virtually nonexistent weeks ago, has suddenly burst into public view in the wake of Sen. Joe Manchin (D-W.Va.) killing the president’s climate and social spending bill.

And I think he’ll probably get demolished in the midterms,” said Corbin Trent, co-founder of the progressive No Excuses PAC and former communications director for Rep. Alexandria Ocasio-Cortez (D-N.Y.).

“People will smell opportunity, and D.C. is filled with people who want to be president.”

No one now in office — and none of the top-tier presidential contenders from 2020 — is viewed as a serious prospect to take on Biden.

Nor is there any expectation that Sanders or Sen. Elizabeth Warren, both of whom have enjoyed a significant amount of influence in the Biden administration, would primary Biden.

Few seriously think Ocasio-Cortez would risk her political capital in a long-shot challenge to the president, either.