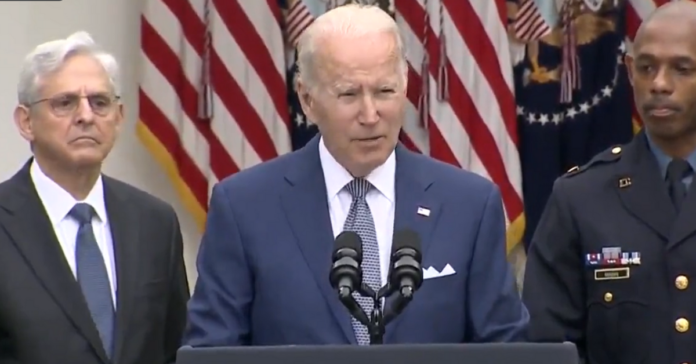 President Joe Biden got grumpy today when he was pressed on the shocking baby formula shortage hitting the country. Biden snapped out at the reporter the single worst excuse he has offered so far the total and complete incompetence of his administration.

Biden said he would take a question on the formula shortage  because “all of a sudden it’s on the front page of every newspaper.” It only got worse for Biden and the few defenders this guy has left.

Biden was asked why he didn’t take steps sooner to deal with the lack of baby formula and Joe snapped saying: “If we had been better mind readers, I guess we could’ve but we moved as quickly as the problem became apparent to us.”

BIDEN: "If we had been better mind readers, I guess we could've" taken action to address the baby formula crisis sooner.

Biden hadn't said ONE WORD in public about this crisis until today. pic.twitter.com/w3KFLd3kOO

“This is hardly the first time that there’s this slow-rolling anticipated disaster happening exactly as forewarned — whether it’s the exit from Afghanistan, the border surge.”

And there it is. Joe Biden’s FDA shut down the most important baby formula plant in the country months ago.

The biggest plant in the USA that makes heavily regulated baby formula shut down (for months) and team Biden is just now trying to solve what everyone knew was coming?

How is this possible, again, as Jake Tapper reminds us?

Look, at this point, Biden needs to resign or clean house and fire his entire staff. This is inexcusable. And either he is the problem or his team is.

“We’re going to be in a matter of weeks – or less – getting significantly where more formula is on shelves.

"This is hardly the first time that there's this slow-rolling anticipated disaster happening EXACTLY as forewarned — whether it's the exit from Afghanistan, the border surge." pic.twitter.com/RsExf2Fl8m

“This is a process we working very, very hard.

“There’s nothing more urgent we’re working on that right now. And I think we’re really making some significant progress,” he said.

When Biden says the problem will be solved in weeks or less he is full of it because the plant owners (Abbott) said it would take them 10 weeks to get everything humming again.

But Biden could overrule the FDA and OK importing what many consider to be safer European formula and probably solve the problem overnight.

In fact, his team should have been preparing for that possibility as soon as they realized the plant would be shut down for a while.

Instead, Joe snaps at a reporter. Resign or fire your staff and try again because this is not working.

After not saying ONE WORD about the baby formula shortage previously, Joe Biden says he'll finally answer a question on the issue because "all of a sudden it's on the front page of every newspaper" pic.twitter.com/B9D1JesZ8u