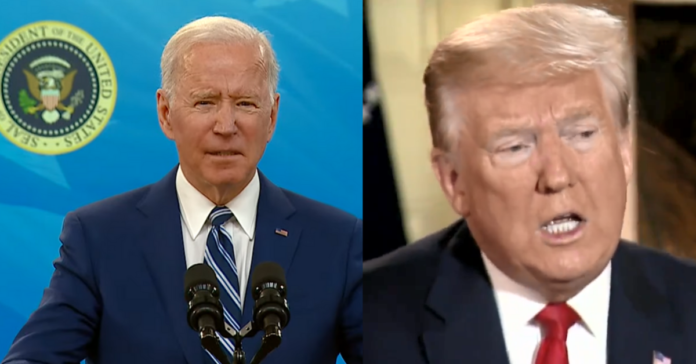 Joe Biden is now, after ripping Trump for making it a priority, considering restarting construction on Donald Trump’s southern border wall DHS Secretary Alejandro Mayorkas said. “It’s not a single answer to a single question. There are different projects that the chief of the Border Patrol has presented and the acting commissioner of CBP [Customs and Border Protection] presented to me,” Mayorkas said.

“The president has communicated quite clearly his decision that the emergency that triggered the devotion of DOD funds to the construction of the border wall is ended,” he continued.

Mayorkas says these new projects could include filling in “gaps,” adding “gates” and finishing areas “where the wall has been completed but the technology has not been implemented.”

On February 11, Biden ended Trump’s southern border emergency, which was issued through executive order in February 2019.

In the reversal, Biden slammed Trump by saying: ‘Building a massive wall that spans the entire southern border is not a serious policy solution. It is a waste of money that diverts attention from genuine threats to our homeland security.’

There were immediate concerns with the legality of the reversal, with experts claiming it could be illegal for Biden to stop funding that was already appropriate in Congress-approved funding for the wall specifically.

The president campaigned on the promise of immediately ending the building work along the U.S.-Mexico border.

Charles Young, a public affairs officer for the GAO, confirmed they were investigating whether Biden was legally allowed to end the construction.

Congress approved nearly $1.4 billion in border wall funding in December 2020 for fiscal year 2021 as part of a $900 billion coronavirus stimulus package under Trump.

Chair of the Senate Republican Policy Committee Roy Blunt slammed Biden for the change, claiming as a 36-year veteran of the Senate, he should know procedure better.

‘He was in the Congress a long time,’ Blunt said. ‘He knows it’s the Congress’ job to authorize how the money is spent and the president’s job to spend it efficiently.’

It now appears that Biden could be reversing his reversal by going forward with construction of the wall – at least in some parts.

PRESIDENT TRUMP “WALL” to be “restarted” as per the DHS to help quell the SURGE.
Good IDEA!!!https://t.co/PB8XwqgILa

This border crisis must be addressed, and I’ve joined several of my colleagues in requesting a briefing with @SecBecerra. You can read more on this and our full letter at the link below. (2/2) https://t.co/LvZppWdyRW

Rep. @AOC on the border: "What is happening here is not the same as what happened during the Trump administration, where they took babies out of the arms of their mothers." pic.twitter.com/d5lVhTxWUi