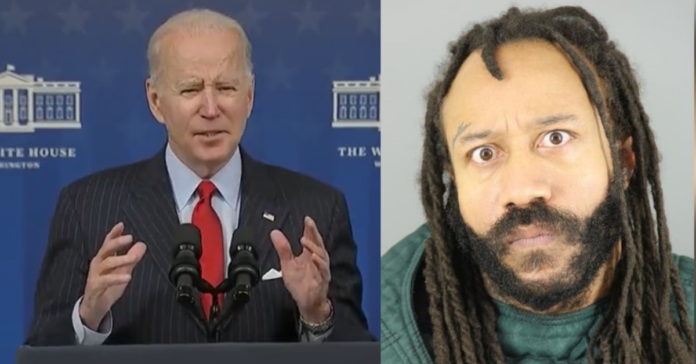 The White House is inexplicably doubling down on a political disaster and bad policy and it will doom them in the next few elections.  Most Americans are just now realizing that progressive District Attorney’s across the country have been reforming bail terms as they view the system as favoring the wealthy.

It may have been a noble plan, but it backfired. Crime is rampant in our cities because the criminals know they won’t face any penalties. They won’t prosecute smaller crimes so now armed gangs loot and pillage at will through our cities and suburbs.

They said only nonviolent offenders will be let out but the revolving door in Chicago has led to an explosion of carjackings and armed robberies. No one was surprised to discover the perpetrators were often on bail despite having been arrested for violent crimes.

The issue of bail reform was forced upon this country with the case of Darrell Brooks, the guy who killed at least six people at a Wisconsin Christmas parade. He should not have been let out on bail.

He was a menace to his community and his family. His own nephew begged a judge to grant a restraining order on Brooks after Brooks shot the kid.

You would think the Dem Party would bow to the reality, and change course. The GOP will wipe out the Dems in the key swing state of Wisconsin if they don’t.

So did the Dems do the right and politically smart thing? No, the White House will not change course and will continue to push for an end to cash bail.

“Ending cash bail will not automatically put people charged with crimes on the streets,” a White House official told Fox News. “It just means that whether you get bail should be based on the threat you pose, and not how much money you have in your bank account.”

“There shouldn’t be a separate criminal justice system for wealthy Americans,” the official added.

“Ultimately though, this was a decision made by local courts,” the official added.

A letter from President Joe Biden and Vice President Kamala Harris last month said reforms to the bail system are needed to promote equality saying that America has “never fully lived up to” the idea that “every one of us is equal in dignity and deserves to be treated equally.”

Milwaukee County District Attorney John T. Chisholm’s office said they would conduct a review of what happened although he must not have told Joe Biden.

“Below is the summary of pending charges against Mr. Darrell Brooks: On July 27, 2020, the Milwaukee County District Attorney’s Office issued two counts of second-degree Recklessly Endangering Safety and Felon In Possession of a Firearm in case2020CF002550.

“Cash bail was originally set at $10,000 and subsequently reduced to $7,500.Unlike some other states, Wisconsin requires payment for the full amount of bail set in any criminal case.

“The case was adjourned and bail reduced to $500, which the defendant posted on February 21, 2021. On November 5, 2021, the Milwaukee County District Attorney’s Office issued against Mr.Brooks charges of Second Degree Recklessly Endangering Safety, Felony Bail Jumping, Battery, Obstructing an Officer, and Disorderly Conduct in case 2021CF004596.

“The most recent case against Mr. Brooks was appropriately charged. The State made a cash bail request in this case of$1,000, which was set by the court.

“The defendant posted $1,000 cash bail on November 11, resulting in his release from custody. The State’s bail recommendation in this case was inappropriately low in light of the nature of the recent charges and the pending charges against Mr. Brooks.

“This office is currently conducting an internal review.”