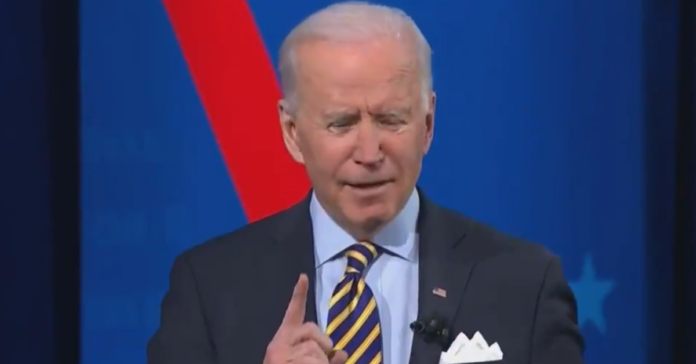 Joe Biden could be stripped of his war powers in a stunning show of strength by the Senate after forty years of rolling over for presidents and letting them conduct wars without proper oversight.

Only Congress can declare war in this country because we used to know how dangerous foreign wars were – to our young men and women and to our debt load. But Presidents over the years on both sides of the aisle slowly took that power as their own.

They used national emergencies and other excuses to take power from Congress and it is time to go back to the way the constitution was written.

This is a bipartisan bill that was introduced by senators yesterday so it has a real chance of passing. If it does, it will repeal decades-old authorizations given to the US President so they can have a carte blanche to use or misuse military force.

It also comes just hours after an Iraqi military base housing U.S. troops and civilian contractors was hit by rocket attacks.

The bill would repeal the 1991 and 2002 authorizations that cleared the way for a prolonged military conflict in Iraq, culminating in calls from Democrats and Republicans alike to end the so-called “forever wars” in the region.

“Last week’s airstrikes in Syria show that the executive branch, regardless of party, will continue to stretch its war powers,” Kaine said.

“Congress has a responsibility to not only vote to authorize new military action, but to repeal old authorizations that are no longer necessary.”

Congress has largely abdicated its constitutional authority to declare war, and presidents from both parties have used outdated authorizations to legally justify U.S. military action — including, and perhaps most notably, the 2001 authorization for the use of military force against al Qaeda and the Taliban, which was approved in the aftermath of the Sept. 11 attacks.

The Kaine-Young bill, though, only deals with the 1991 and 2002 measures, which are entirely focused on Iraq.

For example, the outdated authorizations have been used to give legal cover to U.S. military operations throughout the region, including those targeting ISIS and other jihadist offshoots in the region.

“Congress has been operating on autopilot when it comes to our essential duties to authorize the use of military force,” Young said.

“The fact that authorities for both of these wars are still law today is illustrative of the bipartisan failure of Congress to perform its constitutionally-mandated oversight role.”