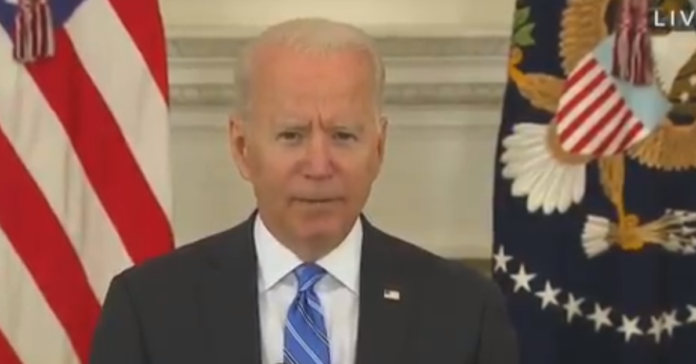 At the White House on Monday, President Joe Biden admitted to making a huge flub and then tried to correct the record but for many, the damage was done. Biden made some stunning comments blaming Facebook for ‘killing people.’

“I’m glad you asked me that question,” Biden said after giving a speech on the state of the economy where he said the inflation the country is experiencing is only ‘temporary.’

“That’s what I meant,” Biden added. (see the video below)

Facebook and many others were outraged by Biden’s earlier flub.

“We will not be distracted by accusations which aren’t supported by the facts,” Facebook spokesperson Dani Lever said.

“The fact is that more than 2 billion people have viewed authoritative information about COVID-19 and vaccines on Facebook, which is more than any other place on the internet.

“More than 3.3 million Americans have also used our vaccine finder tool to find out where and how to get a vaccine. The facts show that Facebook is helping save lives. Period.”

Last week, Biden appeared to say just that: Asked outside the White House what his message was to platforms like Facebook regarding Covid disinformation, Biden said, “They’re killing people.”

“I mean they really, look, the only pandemic we have is among the unvaccinated, and that’s — they’re killing people,” Biden said Friday.

President Biden clarifies his statement about Facebook: "My hope is, that Facebook instead of taking it personally, that somehow I'm saying 'Facebook is killing people', that they would do something about the misinformation." pic.twitter.com/GXfZOHxWKl

From the president to his top aides, the White House is making a concerted effort to soften criticism of Facebook after days of back-and-forth over the spread of misinformation. "We are not in a war or a battle with Facebook," Jen Psaki says. "We are in a war with the virus."

Asked whether the platform has done enough so far to blunt the spread of misinformation, Biden says, “To be completely honest with you, I don’t know that they did anything today, up to over the weekend, I don’t think they had. But I don’t know."