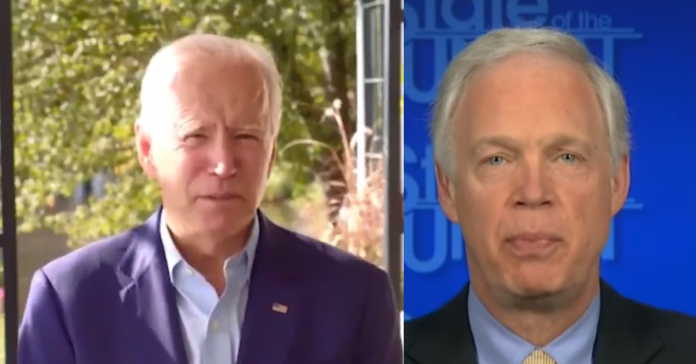 Former Vice President Joe Biden just broke his silence on the Hunter Biden allegations after days of trying to ignore the story.

He took questions from a local reporter is what looked to be a staged setting so Biden could finally address the issue but not under tough questioning.

He will face Trump in a debate tomorrow night and you know Trump will hammer him over the story.

“Wisconsin’s Republican Senator Ron Johnson put out a statement — on Homeland Security letterhead — saying Hunter Biden, together with other Biden family members, profited off the Biden name,” local reporter Adrienne Pedersen said before she got to the question.

She then asked what “legitimacy” there was to the claims. Biden said “none whatsoever.”

“This is the same garbage Rudy Giuliani, Trump’s henchman, it’s a last-ditch effort in this desperate campaign to smear me and my family,” he said.

“Even the man who served with him on that committee, the former nominee for the Republican Party, said there’s no basis to this,” he said of Mitt Romney.

“And the vast majority of the intelligence people have come out and said there’s no basis at all.”

Then he went after Ron Johnson:

“Ron should be ashamed of himself”

"This is the same garbage — Rudy Giuliani Trump's henchmen. It's a last-ditch effort in this desperate campaign to smear me and my family."

"Ron should be ashamed of himself." pic.twitter.com/cZ2vcKSh2r