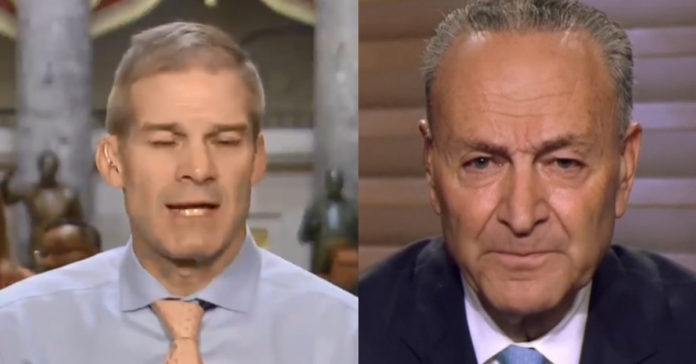 Jim Jordan always has President Trump’s back and after the showdown in the Oval with the leading Democrats yesterday, Jim made his move.

Nancy Pelosi told Trump he did not have the votes in the House and the fact is the Democrats in the Senate signaled they would not approve the $5 billion number so the House voted for the $1.6 billion. Because that was the only option.

That is way different than not having the votes and Jim Jordan aims to prove it and checkmate Chuck and Nancy in the process.

If the House passes the higher number it will be up to Chuck and the Democrats to shut down the government or allow for slightly more money for the wall. Remember, they once voted for $25 billion for the wall so they will cave when it comes down to it.

“We make the job of serving in Congress way too complicated. It’s pretty basic. What did we tell the voters we were going to do when they elected us to represent them? That’s what we should do.

Voters elected President Trump to shake up Washington. In his first two years, the president has kept his promises. Now it is Congress’s turn. We have three weeks to help him deliver on his biggest promise: securing the border and building the wall.

The situation at the southern border is critical. The recent caravan was only the first of many. They’re coming because they have a reason.

A series of loopholes in our immigration laws have led to a policy called “catch and release.” When illegal aliens are caught at the border, these loopholes often allow them to enter our nation to wait for an immigration hearing. Sometimes these hearings are years in the future. All too frequently, they don’t even show up.

The border security wall will help fix the issue.  Apprehensions dropped 95 percent in the San Diego sector after the double barrier was put into place. Israel’s border wall cut illegal immigration by 99 percent.

The last legislative opportunity to address these issues is the year-end spending bill.  The fact that it’s a bill that must pass creates the burning platform needed to force Congress to actually act and the leverage we need to get these reforms through the Senate.  The funding bill is the only option.

The House Freedom Caucus will offer two amendments to this bill. First, we need to end the catch and release problem. Second, we need $5 billion in unrestricted funding for the border wall.

Our members will not vote in support of a bill that doesn’t include these provisions.  The president should also use his veto pen to ensure that Congress listens.

This battle won’t be easy. Nothing worth doing ever is. But if we have the political will, we can win. We have the American people on our side.”