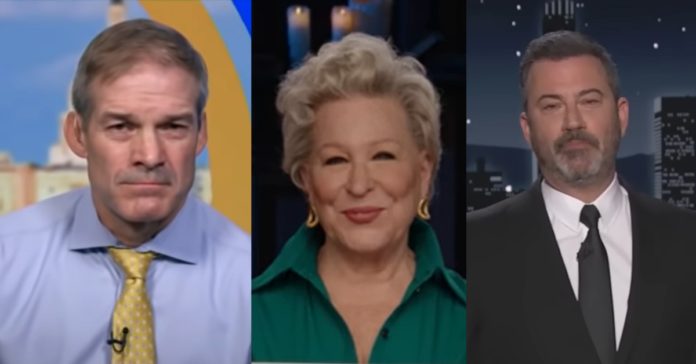 Jim Jordan shut down Hollywood stars and failed politicians trashing the Supreme Court over the abortion ruling in such a brutal fashion that they should all close their mouths on the subject. Forever. But they won’t.

Jimmy Kimmel said: “Ready for birth control and same sex relationships to go away too? THE CRAZY PEOPLE ARE TAKING OVER BECAUSE WE DON’T ACT!”

Taylor Swift said, “I’m absolutely terrified that this is where we are – that after so many decades of people fighting for women’s rights to their own bodies, today’s decision has stripped us of that.”

Bette Midler said: “They did it. THEY DID IT TO US!”

Hillary Clinton said: “Most Americans believe the decision to have a child is one of the most sacred decisions there is, and that such decisions should remain between patients and their doctors.

“Today’s Supreme Court opinion will live in infamy as a step backward for women’s rights and human rights.

Joe Biden voted to let states overturn Roe v. Wade when he was in the Senate.

“Joe Biden voted to let states overturn Roe v. Wade when he was in the Senate. Interesting!”

In 1982 Joe Biden supported a constitutional amendment that would overturn Roe v. Wade and allow states to choose their own policies on abortion.

“I don’t like the Supreme Court decision on abortion. I think it went too far,” Biden had told the Washingtonian magazine in 1974.

“I don’t think that a woman has the sole right to say what should happen to her body,” Biden said as the youngest senator in his early 30s adding he was “really quite conservative on most other issues.”

In 1982 Biden was one of only two Democrat lawmakers supporting a constitutional amendment that would allow states to overturn Roe v Wade and pass their own laws on abortion.

“I’m probably a victim, or a product, however you want to phrase it, of my background,” Biden said at the time. Biden called his vote “the single most difficult vote I’ve cast as a U.S. senator.”

In 1994, Biden brags that he has voted against abortion funding on 50 separate occasions. He voted for partial birth abortion bans twice.https://t.co/XiVbeBM32x

Ready for birth control and same sex relationships to go away too? THE CRAZY PEOPLE ARE TAKING OVER BECAUSE WE DON'T ACT!" Clarence Thomas WROTE that justices “should reconsider all of this Court’s substantive due process precedents, including Griswold, Lawrence, and Obergefell”