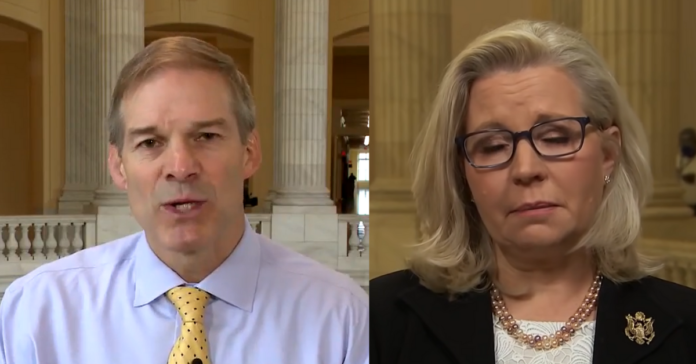 Rep. Jim Jordan, R-Ohio, broke his silence on the unprecedented subpoena he received by the Liz Cheney led Jan. 6 committee calling it one more step in the attempt to weaponize government on “The Faulkner Focus.”

Jordan said: “Well, look, the Democrats have broken every kind of precedent you can imagine with what they’ve done to former White House chief of staff Mark Meadows with that subpoena and that contempt vote.

“I mean, what they’re doing at the Department of Justice to moms and dads, the formation of a disinformation governance board. I mean, they’re doing things we never saw the weaponization of government and now the weaponization of this committee, where for the first time, Harris, never forget this first time in the history, the history of the House of Representatives, since we’ve been a country where the minority leader was not allowed to place on a select committee the individuals he or she selected.

“So you can just go proxy voting in the chair, closing off the Capitol to the American people.

“On and on we go. Things we have never seen.

“This is just one more step in the crazy things they’re doing.

“All the while you have moms who can’t get formula.

“You have 41-year high inflation. On and on we go. So you think about that. Moms can’t get formula and everything they need for their sons and daughters, for their family costs more.

“And oh, by the way, we’re going to target you if you show up at a school board meeting advocating for your child.

“That’s what this administration has done.

“And what are Democrats doing breaking every precedent, every norm we have that keeps our separate, equal branches of government operating the way they’re supposed to under the Constitution,” he said.

According to multiple reports, the Dems were afraid to take the extraordinary step of subpoenaing colleagues but Liz Cheney pushed for it.

At the Capitol on Thursday, Cheney said the decision to subpoena sitting members of Congress was “a reflection of how important and serious the investigation is, and how grave the attack on the Capitol was.”

“We asked these five individuals to come in and speak with us and they’ve refused, and they have an obligation,” the Wyoming Republican said. “They have critically important information about the attack that we need for the investigation.”

The committee has signaled for weeks that it could issue subpoenas if the congressmen didn’t voluntarily comply with their requests. Rep. Adam Kinzinger of Illinois, the other Republican on the panel, told “Face the Nation” earlier this month that the committee would “ultimately [do] whatever we can do to get that information” from members.

“We’ve requested information from various members. In terms of whether we move forward with a subpoena, [that] is going to be both a strategic, tactical decision and a question of whether or not, you know, we can do that and get the information in time,” Kinzinger said in the May 1 interview.