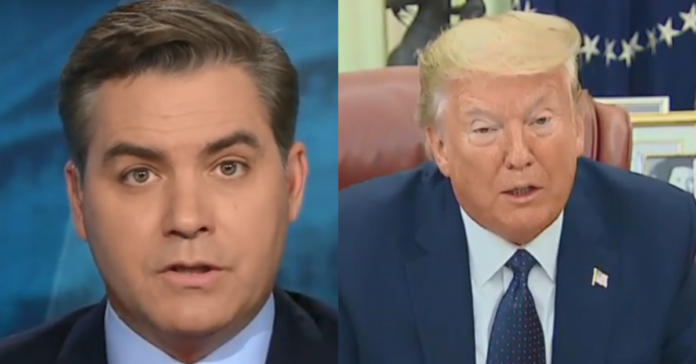 CNN’s Jim Acosta went too far when he launched a new broadside at Trump over his campaign-style presser from the Rose Garden yesterday.

The entire left was up in arms that Trump used the White House for a camping event noting that traditionally presidents didn’t do that.

But during an election every event with a president is political so I am not sure how the Dems can make that claim, but even if they could should the media chime in like Acosta and say Trump “soiled the Rosie Garden?” Pretty strong language for a “neutral” reporter.

Anderson Cooper, who is billed as a news anchor and has even moderated presidential debates, took a jab at Trump’s “tan” when offering his opinion on the Rose Garden remarks.

“This wasn’t some stadium packed full of supporters who come jeer and cheer and bask in the glow of this artificially tan man. His meandering screed was not close to anything one would expect, or accept, of a president but that shouldn’t surprise us,” Cooper told viewers before mocking the way Trump breathes.

“We listened to this man muse and meander, rant and regurgitate the same tired tropes and untruthful claims. We watch him boast and brag and preen do that odd thing with his nose when he sucks in air very loudly and none of it surprises us. That’s how far we have fallen,” Cooper said.

Later in the evening, Acosta was back to discuss the Rose Garden event with Cooper, who asked if White House staffers shake their heads at such behavior from the president.

“No, Anderson, we are down to Kool-Aid drinkers and next-of-kin here at the Trump White House. There are no more adults that will level with the president and tell him he can’t deliver a rally-like rant in the Rose Garden as he did earlier this evening,” Acosta answered.