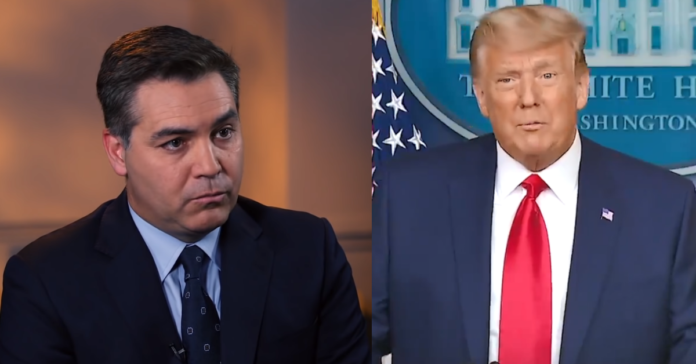 CNN’s Jim Acosta gave up the game when he trashed President Trump on CNN today saying he was cuckoo-for-cocoa-pops.

President Trump surprised the media today and spoke for about a minute during a press conference to briefly talk about vaccines before he celebrated the stock market’s historic gains today.

The Dow hit 30,000 for the first time in history something Trump and all Americans should celebrate and be proud of.

But not for the media, for them it was another chance to take cheap shots at Trump. What are they going to do for the next four years? Investigate Biden? Don’t count on it.

Biden will be so boring they will probably cover Trump as President in exile in Mar a Lago if they think it will sell.

CNN White House reporter Jim Acosta said of Trump’s surprise appearance at the press briefing today “it’s hard to put the cereal back in the box when you’ve gone cuckoo for Cocoa Puffs.”

He also said Trump’s remarks were “the strangest, weirdest thing I’ve ever seen in the White House briefing room.”

He continued, and “just the strangest thing – to see the President run, basically, come out into the briefing room, we have White House staffers shouting at us to get in our places because he wanted to walk into the room.”

“It’s hard to put the cereal back in the box after you have gone cuckoo-for-cocoa-pops…” @Acosta @CNN describes President Trump strange visit to the White House briefing to take credit for the stock market doing great today. pic.twitter.com/tbymJTJPQG

Media: @Acosta to @niaCNN on @realDonaldTrump's sudden appearance: "There was chatter on Wall Street that this pop in the Dow was related to the @JoeBiden transition and appointment of Janet Yellen to Treasury. I think that precipitated #Trump wanting to take credit, himself." pic.twitter.com/H7fxkjn9NT