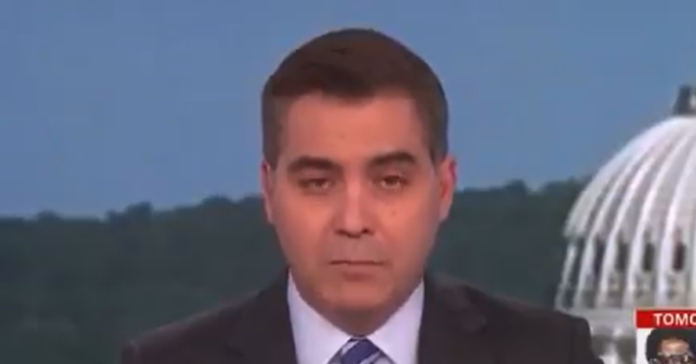 During Saturday’s broadcast of CNN Newsroom, Jim Acosta cursed out Fox News on live television showing the desperate need for attention he still craves. Acosta became the story during Trump’s term and turned the attention into book deals and more.

“That tale from the border didn’t just border on BS, this was USDA Grade-A bullsh*t,” Acosta said Saturday about the conservative network. “And the reporter who wrote the story resigned, claiming she was forced to make it up. But the damage was done, pumped out over the airwaves at the bullsh*t factory also known as Fox News.”

“Now you may want to laugh this off, as the old saying goes, while the truth is still lacing up its boots but the lies these days are moving at the speed of light while spreading so much darkness,” he said.

“Remember, lies, big lies can have terrible consequences. They travel at the speed of light and spread too much darkness.”

The Acosta-anchored Saturday programs have averaged 796,000 viewers since the former White House correspondent took over on April 3. Over the first three months of 2021, CNN averaged 1.141 million viewers on Saturdays during the same time slot, indicating a 30% drop in viewership with Acosta behind the anchor desk

But the decline isn’t simply a product of CNN’s brief post-election ratings bump at the beginning of the year.

Acosta’s viewership issue is worse on Sundays, when his edition of “CNN Newsroom” has averaged 710,000 viewers. That’s a staggering 41% drop from the network’s average of 1.196 million viewers in the timeslot over the first three months of 2021.

OPINION: @Acosta styles himself as a truth-telling journalist. While covering the Trump White House, he seldom missed a chance to make himself the story.

It worked. He scored book deals, awards, and speaking gigs.https://t.co/5XMoAS2J0L