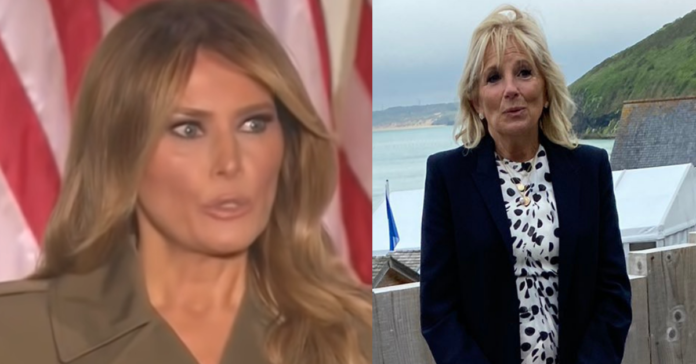 During President Biden’s first in-person meeting with Prime Minister Boris Johnson on Thursday, Jill Biden seemed to take a veiled swipe at Melania Trump. The first lady wore a black jacket over her dress as the leaders met on an overlook England with the word LOVE on the back. (See pictures below)

Melania Trump famously wore a jacket to visit the southwestern United States border that said “I really don’t care, do u?” The jacket spawned a million memes and the brand that sold it couldn’t keep it in stock. Melania stayed silent about the meaning behind the jacket but her spokeswoman spilled the beans later.

Mrs. Trump’s spokeswoman said that the message was intended as a swipe at the media and that Melania was not commenting on the conditions the migrant children were dealing with at the border.

Reporters asked Jill Biden about the jacket and she said:

“I think that we’re bringing love from America. This is a global conference, and we are trying to bring unity across the globe.

Her communications director, when asked by reporters if this was a swipe at Melania, referred them to Jill’s comments.

First lady Jill Biden wore a jacket with the word “LOVE” on the back when meeting with British Prime Minister Boris Johnson and his wife Carrie Johnson on Thursday, telling reporters it was meant as a show of “unity.”

The jacket was seen by some as an effort to draw a contrast with former first lady Melania Trump, who on a trip to visit a migrant detention center in 2018 wore a jacket that said “I really don’t care, do you?,” attracting massive attention and spurring controversy.

Jill Biden wears jacket with word “LOVE” on back as the Bidens + Johnsons meet – immediately invoking comparisons with Melania Trump’s controversial jacket with the words “I really don’t care” in 2018 #G7 pic.twitter.com/UurTDS6NN9

.@FLOTUS with a simple message on the back of her jacket: LOVE.

“We’re bringing love from America… This is a global conference, we’re trying to bring unity across the globe.” pic.twitter.com/pm5khF9fUW

People aren't very observant (or have short memories). Dr. Biden wore this jacket at a campaign rally in May 2019. pic.twitter.com/rYhpzuQUEa

Traveling with President Biden in the UK, Jill Biden wore a jacket on Thursday that read “LOVE” on the back, an echo of Melania Trump’s “I really don’t care, do u?” jacket that she wore in 2018 to visit children separated from their parents at the border. https://t.co/0EJHqAfAd6