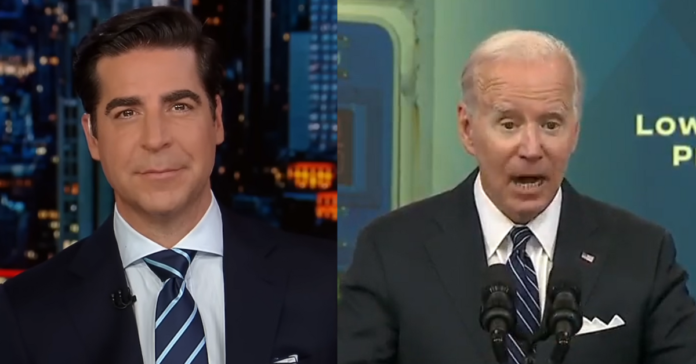 Jesse Watters has two shows in the top ten most-watched shows on cable. He is smart and funny but most importantly, he tells it straight to his viewers. He did the same to President Joe Biden because someone has to.

“The White House has to keep pushing out positive content. And what have we gotten that’s seared into the minds of the American people? He gets up from the fall and he says to the reporters ‘I’m fine.’ And the reporters print the story ‘Joe is fine.’

“Joe is not fine. Nothing is fine.

“This guy has had two aneurysms before becoming President. He broke his foot last year, he’s fallen twice.

“His son is corrupt and under investigation. He’s the worst polled president in the history of presidential polling.

“Joe Biden is a clueless mess,” he said.

On the same day Joe Biden gave his inflation speech to the American people, a speech where he promised action without specifics as all failing politicians do, a speech where tried to blame others for his problems, his own Fed Chairman made that impossible by saying, “inflation was high before, certainly before the war in Ukraine broke out.”

Biden looked tired and bored especially at the parts of the speech where he was supposed to get angry but he just looked ridiculous. (see the video below)

Is Joe Biden really the best communicator they have in the administration?

Another awful performance for Biden.

But it gets worse for Joe. At roughly the same time Biden was yell whispering into the television cameras, the Fed Chairman was contradicting him on inflation.

Biden’s entire argument was wiped out by comments the Fed Chairman made almost in real time, a new record of incompetence for Biden.

Q: “Would you say that the war in Ukraine is the primary driver of inflation in America?”

Fed Chair Powell: “No. Inflation was high before, certainly before the war in Ukraine broke out.” pic.twitter.com/hu69s1ELoF

Powell, confirmed last month to a second term as chairman, explained to the Senate Banking Committee that “inflation was high before” the Feb. 24 Russian invasion of Ukraine, which increased global food and energy prices.

Sen. Bill Hagerty (R-Tenn.) elicited the remark from Powell at a committee hearing after laying out the fact that inflation grew higher over the course of 2021.

“I realize there are a number of factors that play a role in those historic inflation that we’re experiencing — supply chain disruptions, regulations that constrain supply, we’ve got rising inflation expectations and excessive fiscal spending, but the problem hasn’t sprung out of nowhere,” Hagerty said.

Biden: "To the companies running gas stations and setting those prices at the pump, this is a time of war, global peril, Ukraine. These are not normal times. Bring down the price you are charging at the pump. Do it now." pic.twitter.com/DF9TEduoM5